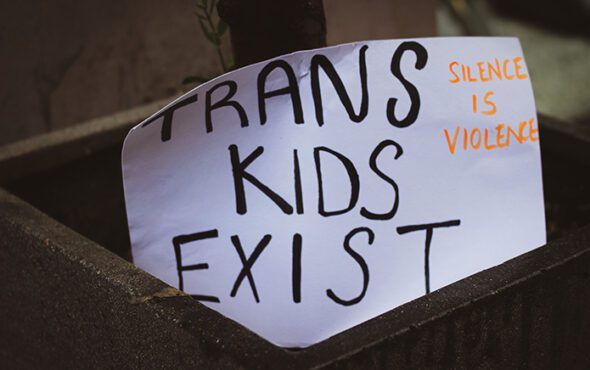 LONDON  (Thomson Reuters Foundation) – Transgender teenagers prescribed cross-sex hormones are less likely to have suicidal thoughts and other mental health problems as adults, research showed this week as lawmakers in several U.S. states seek to ban the treatment among minors.

Debate has grown about the age at which transition treatment should begin as more people come out as trans. Some fear hormones and puberty-blocking drugs are prescribed too early or hastily, but others say access to them can be life-saving.

The new paper published by researchers at Stanford University and The Fenway Institute, a Boston-based LGBT+ health research center, found trans adults who started hormones before 18 were less likely to report recent suicidal thoughts than those who did not.

“We’re already seeing that so few transgender and gender-diverse people, and young people in particular, are able to access the support and medical care that they need,” said Jack Turban, lead author of the paper published in peer-reviewed journal PLOS-ONE.

“Now it may be getting even worse (with) introducing these bills,” Turban, a child and adolescent psychiatrist at Stanford University School of Medicine, told the Thomson Reuters Foundation in a video call.

The state bills presented this year would bar healthcare professionals from providing minors with puberty-blocking drugs, hormones and gender-reassignment surgeries. Most such surgeries are not usually performed before adulthood.

A similar law passed last year here in Arkansas and was suspended here by a federal judge.

Among those who supported the Arkansas law – presenting a friend of the court filing in the ongoing case – was the Women’s Liberation Front (WoLF), a group that says it works to “protect, advance and restore the rights of women and girls”.

Alix Aharon, an advisory council member of WoLF, which also opposes trans women’s participation in college sport, said by email that providing puberty blockers, cross-sex hormones or surgery to minors was “a crime against humanity and also child abuse”.

Keira Bell, a British woman who “detransitioned” after taking puberty blockers at 16 and hormones at 17, also filed an amicus brief in favour of the Arkansas law along with five other detransitioned women.

The women said they “continue to experience grief, remorse, and regret for what has been taken from them”, according to a copy of their filing posted on the website of the American Civil Liberties Union (ACLU), a legal civil liberties group.

Bell, whose story has been cited by conservative U.S. legislators, brought a case here in Britain that sought to restrict the prescription of puberty blockers.

But trans advocates in both the United States and Britain welcomed Turban’s study, which analyzed a 2015 survey among 21,598 U.S. transgender adults who had sought access to cross-sex hormones.

“I do really want to stress that puberty-delaying treatment, that hormones, that none of it is necessary for being trans and being happy,” Madeleine said. “But for people for whom that is the right path, who can get access to it, it’s transformative.”