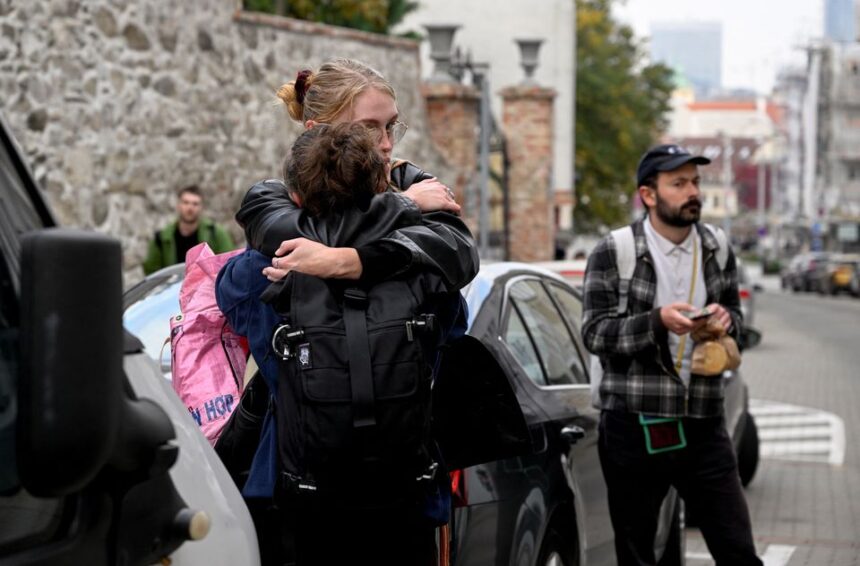 People embrace one another near the site of a shooting in Bratislava, Slovakia October 13, 2022. REUTERS/Radovan Stoklasa
SHARE

A gunman killed two people and wounded another near the Teplaren bar in the city centre on Wednesday evening, police said. The suspected attacker was himself found dead on Thursday morning, officers added.

“I strongly condemn a murder of two young people shot dead in Bratislava last night by a radicalised teenager,” Heger wrote on Twitter.

“No form of white supremacy, racism and extremism against communities, incl. LGBTI, can be tolerated,” he added.

Police said they have not yet determined the motive behind the shooting and asked the public for patience as they looked into the possibility that it was a hate crime.

Slovak media reported the main suspect had posted messages with the phrases “hate crime” and “gay bar” hashtagged on Twitter. The Dennik N news website said the attacker had posted a manifesto against the LGBT and Jewish communities before the killings.

The Duhovy PRIDE Bratislava (Rainbow PRIDE) group said it was shocked by the attack, while Slovak President Zuzana Caputova offered her support to the LGBT community.

“I want to say to the LGBT community, it is not you who don’t belong here, it is not you who should be afraid to walk in the streets. It is hate that does not belong in Slovakia,” she told reporters after visiting the scene of the attack.

European Commission President Ursula von der Leyen said her thoughts were with the families of the victims.

“These abhorrent murders are a threat to our societies built on respect and tolerance. The EU is committed to helping fight hate crime and speech in all form. We must protect the LGBTIQ community,” she added.