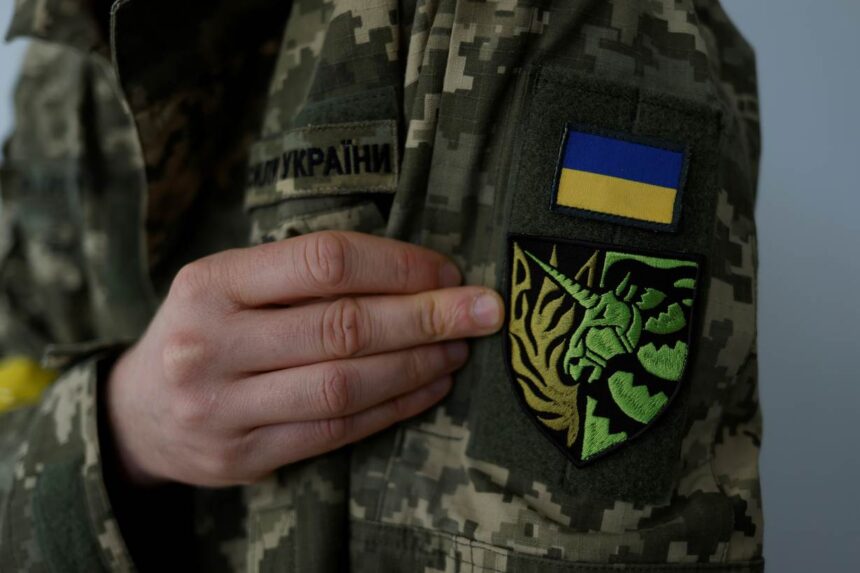 KYIV (Thomson Reuters Foundation) – When Kira learned that her partner Elvira Shchemur had died in a missile strike on Ukraine, the loss hit her doubly hard.

Even as she mourned, Kira knew that as a same-sex partner she had no rights to collect Shchemur’s body.

“Officially, I am no one to her,” said Kira, who asked to be identified by a pseudonym.

Activists and rights researchers say Russia’s invasion has bolstered support in Ukraine for LGBTQ+ people, many of whom have proudly worn a unicorn insignia to signal their identity while fighting in the military.

Others question how far the push will go in bringing rights such as same-sex marriage – and whether the change of attitudes will last.

“Often societies make changes during war that are not followed through on after the wartime period ends,” said Julia Schiwal, an expert on inclusive societies at the United States Institute of Peace.

Schiwal co-authored an analysis of the conflict’s impact on LGBTQ+ rights, which said history has demonstrated that societies become more accepting of minorities during wartime emergencies.

In some cases that has led to a permanent expansion of rights – such as British women being given the vote after World War I – though often minorities were once again marginalised after the conflict ended, the analysis said.

In Ukraine, activists and experts said the war has brought greater social cohesion, while gay and trans soldiers have gained praise and respect for their visible presence on the front lines.

Activists hope a petition for same-sex marriage and a push to join the European Union will bring fresh scrutiny on LGBTQ+ rights.

However, political experts said that progress is not guaranteed, as backing LGBTQ+ causes is still seen as politically risky for lawmakers.

LGBTQ+ Ukrainians have few legal protections – gay sex is legal, but same-sex marriage and adoption rights do not exist.

Yet more broadly, attitudes are slowly changing in the mainly Orthodox Christian nation, which had a pre-war population of almost 44 million people.

Surveys commissioned by Nash Svit, an LGBTQ+ rights organisation, found the percentage of people who had a positive attitude towards LGBTQ+ people rose to 13% this year from 3% in 2016.

While six years ago, the majority of Ukrainians said they felt negatively towards LGBTQ+ people, now most feel either positive or indifferent, found the polls, carried out by the Kyiv International Institute of Sociology.

However, nearly four in ten people still said they had a negative attitude towards the minority groups, it found.

Nash Svit said that rapid progress in levels of acceptance may have been at least partly driven by the war, with attitudes crystallizing against Russia’s promotion of “traditional” values including a crackdown on LGBTQ+ rights.

“Ukrainians have clearly seen what the Russian world brings to us and who are our true friends and allies,” Nash Svit said in a statement summarising the findings.

Political scientist and LGBTQ+ rights activist Maryna Shevtsova told the Thomson Reuters Foundation that moves to improve LGBTQ+ inclusion, while gradual, have been happening for years.

“We see changes at the level of educational institutions, police, healthcare systems because … there have been a lot of projects on educating specialists,” she said.

Earlier this year, a 28,000-strong petition calling for marriage equality prompted the government to look at options for legalising same-sex civil partnerships.

President Volodymyr Zelenskiy has said same-sex marriages would not be possible during wartime as the constitution would have to be changed.

However, he asked Prime Minister Denys Shmyhal to “address the (petition’s) issue” and noted that the government had already been looking into civil partnerships as an option.

But Andriy Sukharyna, a political analyst at think-tank the Ilko Kucheriv Democratic Initiatives Foundation, said he doubted there would be any movement soon.

He said officials often looked to public opinion on such issues – and attitudes have not yet shifted enough to prompt action.

Some activists also hope that Ukraine’s ambitions to join the EU could act as a catalyst for progress on LGBTQ+ rights.

The country became a candidate to join the bloc in June, as Kyiv looked to strengthen its ties with the West. To complete the process, it must meet a series of criteria including standards on human rights including LGBTQ+ equality.

“When Ukraine’s advancement towards the European Union becomes dependent on the solution of some LGBT problems, that’s very important for them,” said Andrii Kravchuk, an advocacy expert for Nash Svit.

“Even (for) conservative politicians … homophobic views aren’t as important for them as Ukraine getting more support from Europe.”

But he said Kyiv could face pressure to bring in a broader ban on LGBTQ+-motivated discrimination and hate crimes as well as a law on civil partnerships, although these were not formal requirements.

However, Inna Sovsun, a member of parliament from the opposition Holos party who has advocated for LGBTQ+ rights, said lawmakers had not kept up with the shift in public attitudes.

“The majority of politicians are trying to hide from this question (of LGBTQ+ rights) as much as possible,” she said.

“As members of parliament we also have to be leaders of the public opinion. We have to advocate for what is right and wrong and not just to be led by our fear,” she added.