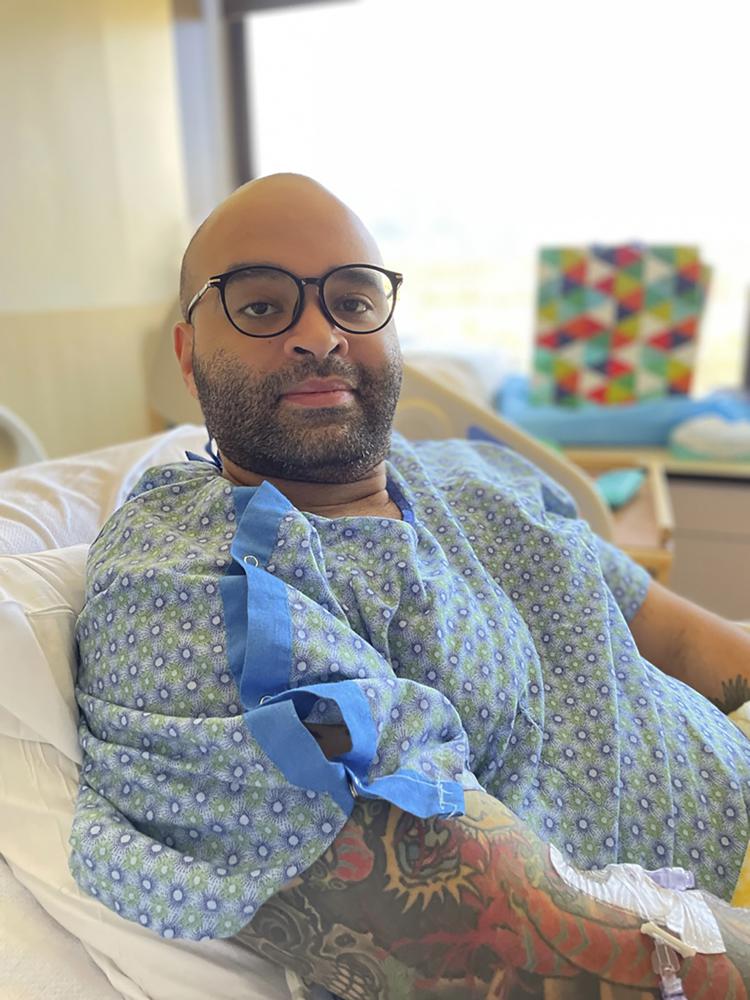 This photo provided by the U.S. Navy shows U.S. Navy Petty Officer 2nd Class Thomas James in Centura Penrose Hospital on Saturday, Nov. 26, 2022, in Colorado Springs, Colo. James, who was injured while helping subdue a man who shot and killed five people at a gay nightclub in Colorado Springs, said in a statement Sunday, Nov. 27, that he “simply wanted to save the family I found.” (U.S. Navy via AP)

COLORADO SPRINGS, Colo. (AP) — A member of the U.S. Navy who was injured while helping prevent further harm during a shooting at a gay nightclub in Colorado last weekend said Sunday that he “simply wanted to save the family that I found.”

Petty Officer 2nd Class Thomas James made his first public comments on the shooting in a statement issued through Centura Penrose Hospital in Colorado Springs, where James is recovering from undisclosed injuries suffered during the attack.

Colorado Springs Police Chief Adrian Vasquez said that James was one of two men who helped to stop the shooter who walked into Club Q late on Nov. 19 with multiple firearms, including a semiautomatic rifle, and killed five people. At least 17 others were injured when a drag queen’s birthday celebration turned into a massacre.

James reportedly pushed a rifle out of the shooter’s reach while Army veteran Rich Fierro repeatedly struck the shooter with a handgun the shooter brought into the bar, officials have said.

“If I had my way, I would shield everyone I could from the nonsensical acts of hate in the world, but I am only one person,” James said in a statement. “Thankfully, we are a family and family looks after one another.”

Patrons of Club Q have said the bar offered them a community where they felt celebrated, but that the shooting shook their sense of safety.

The shooting suspect — Anderson Lee Aldrich, 22 — was visibly injured during his initial court appearance on Wednesday. He was ordered held without bail. Formal charges have not been filed and Aldrich has not spoken about the shooting.

“I want to support everyone who has known the pain and loss that have been all too common these past few years,” James said. “My thoughts are with those we lost on Nov. 19, and those who are still recovering from their injuries.”

Colorado Gov. Jared Polis, the first openly gay man elected governor in the United States, appeared on two Sunday morning TV shows saying he would support increasing licensing requirements for semiautomatic weapons, improving mental health services and better use of red flag laws that allow courts to remove weapons from people having mental health crises and who may be a danger to themselves and others. He also urged the toning down of anti-LGBTQ political rhetoric.

“We know that when people are saying incendiary things, somebody who’s not well-balanced can hear those things, and think that what they’re doing is heroic when it’s actually a horrific crime that kills innocent people,” Polis said on NBC’s ‘Meet the Press.’

James ended the statement by urging young members of the LGBTQ community to be brave.

“Your family is out there. You are loved and valued,” James said. “So when you come out of the closet, come out swinging.”