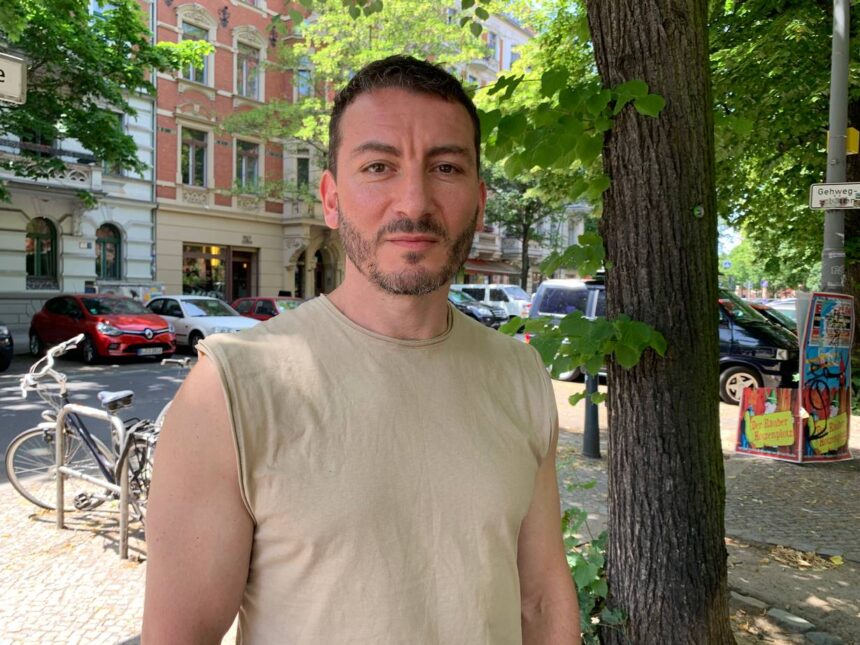 Karen Shainyan, one of the best-known openly gay figures in Russian journalism, poses for a picture in his new neighborhood, where he fled after the Russian invasion of Ukraine, in Berlin, Germany, June 18, 2022. Thomson Reuters Foundation/Enrique Anarte
SHARE

BERLIN/VILNIUS, Aug 24 (Thomson Reuters Foundation) – Before Russia invaded Ukraine, journalist Karen Shainyan was one of the best-known openly gay figures in Russian journalism, covering LGBTQ+ life in a country where sharing “gay propaganda” with minors has been banned since 2013.

But then the war began and, even though Shainyan joined the first protests against President Vladimir Putin’s decision to send tanks across the border, he soon started to look for a way out of his home country.

“I was put on the foreign agents list, which made my life in Russia dangerous and very complicated,” 40-year-old Shainyan told the Thomson Reuters Foundation at a cafe in a popular district of Berlin, where he and his partner now live.

Russia uses the “foreign agent” tag – which carries Cold War spying connotations – as a label for people and organisations it deems to be engaging in political activity with foreign support. It recently further tightened its laws on the issue.

“I’m here because it’s not safe to cover queer rights (in Russia) anymore,” he said, as locals queued up to buy ice cream nearby.

Like him, many LGBTQ+ Russians – including journalists, lawyers and human rights activists – have fled Russia since Moscow launched what it terms a “special military operation”, but which Ukraine and its Western backers call an unprovoked war of aggression.

The Feb. 24 invasion was followed by a crackdown on civil freedoms at home, with opposition figures and journalists targeted by a law seeking jail terms for those convicted of intentionally spreading “fake” news about Russia’s military.

Several independent media outlets have been closed down or suspended operations, including Novaya Gazeta and Znak.com, and LGBTQ+ groups have also been targeted, rights campaigners say.

In April, a Russian court effectively shut down the country’s largest LGBTQ+ rights organisation. That followed a failed attempt by the government to halt its operations last February.

Now, members of the lower chamber of the Russian parliament have proposed extending the 2013 ban on promoting “non-traditional sexual relationships” to adults as well as minors.

“Many activists now don’t have the means to leave the country because many organisations were liquidated or recognised as unwanted organisations, or international agents,” said Svetlana Shaytanova, a spokeswoman at Quarteera, a Berlin-based LGBTQ+ group for Russian-speakers.

Since Feb. 24, more than 300,000 Russians have left the country, EU foreign policy chief Josep Borrell said on Monday as he warned against controversial proposals by Kyiv and several EU states for a ban on Russian travellers entering the bloc.

Many LGBTQ+ Russians have found shelter in visa-free countries such as Turkey, Armenia and Georgia, said Aleksandr Voronov, president of the St. Petersburg-based campaign group Coming Out, himself in Lithuania since March.

Alexandr Derrek, a trans man from the city of Yaroslavl, said he chose to leave Russia for fear of reprisals over his political activism against Putin.

The 23-year-old biology student and his boyfriend are now in the Armenian capital, Yerevan, where they have helped set up a community centre to support LGBTQ+ people fleeing Russia, Ukraine and Belarus.

“I am more free in Armenia, but it’s far from perfect,” Derrek said.

Armenia ranks 47th in Europe for LGBTQ+ rights, according to ILGA-Europe, directly behind Russia and one ahead of Turkey, while Georgia ranks 34th, higher than several European Union countries including Lithuania, Romania and Poland.

In the southwestern Georgian region of Adjara on the Black Sea, Stasia Ekman said she felt safer now after leaving the northern Russian city of Cherepovets.

“It is objectively safer here in Georgia, the danger of going to jail or being beaten or raped has disappeared,” said Ekman, who identifies as a lesbian and non-binary – someone who identifies as neither male nor female.

“You feel that you won’t get killed here.”

The 24-year-old web designer and her partner are working remotely and currently staying at campsites along the coast with their two dogs and two cats.

But still, being an openly LGBTQ+ couple is not easy in the Caucasian country, where she said they had faced “patriarchy, gender stereotypes and homophobia”.

“I am very grateful to Georgia for accepting us and giving us security, (but) now we want to move on.”

Within the European Union, Lithuania has become a favoured destination for many Russians since the war began, with more than 2,200 having applied for a temporary residence permit in the first six months of 2022.

But the Baltic region is also at the centre of the EU-wide debate over denying tourist visas to Russians. Countries such as Estonia and neighbouring Finland back the move, which activists say could hurt potential LGBTQ+ asylum seekers.

Max Poliakov, 38, got a journalist visa one month after arriving in Vilnius, last March, allowing him to continue his former work as a reporter.

As he spoke in the Lithuanian capital, Poliakov pointed to an arm tattoo showing headphones and radio frequencies, a reminder of his time as a radio journalist.

The website of the outlet Poliakov worked for in Russia was blocked early in March after it refused to take down a story he wrote from the Russian-Ukrainian border on the dire conditions facing Russian army soldiers, who it said lacked socks, food and other basic items.

Many of his colleagues are also in Lithuania, where they have continued seeking new ways to counter Kremlin propaganda and reach Russian-speaking audiences on platforms such as Telegram.

But starting a new life in Vilnius has not been easy and even dating has been a struggle.

“I’m in a country I’ve never lived in before. I don’t know the language (and) who wants to have a relationship with a guy who doesn’t have a clear future?” Poliakov said, adding that he feared “decades of trouble” in his homeland.

In Berlin, Shainyan, who is currently making plans to marry his boyfriend in Denmark, where foreigners can get married more easily than in other EU countries, is also bracing for a long time away from Russia, irrespective of the war’s outcome.

“I realised that the Moscow I miss is not the Moscow I can come back to right now, because … most of my circle aren’t there anymore,” he said.

“My Moscow is everywhere right now.”