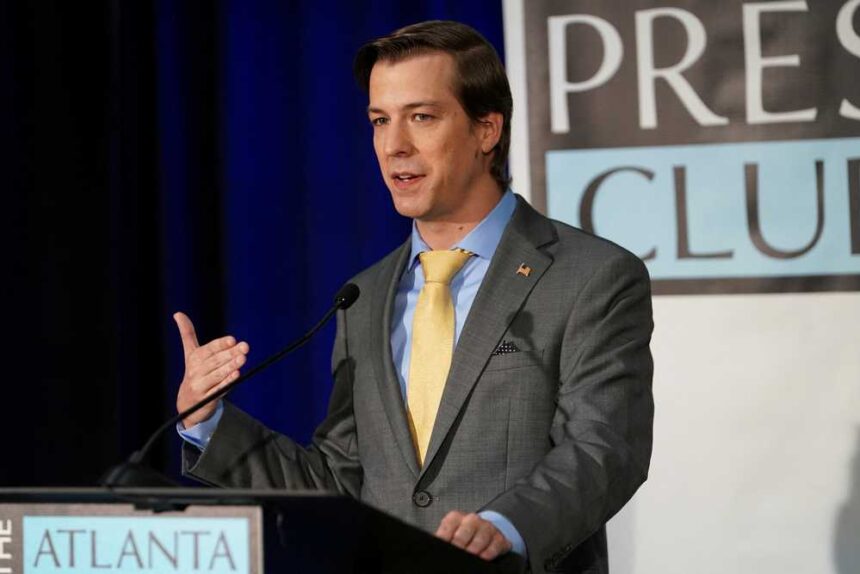 Libertarian candidate for U.S. Senate, Chase Oliver, speaks to the media after participating in a debate at the Georgia Public Broadcasting offices in Atlanta, Georgia, U.S. October 16, 2022. REUTERS/Elijah Nouvelage

(Thomson Reuters Foundation) – If there is one person responsible for Tuesday’s midterms election runoff in the U.S. state of Georgia that will decide the final Senate seat it is Chase Oliver.

The gay Libertarian Party candidate’s 2.1% vote in last month’s midterms race stopped his Republican and Democrat rivals from reaching the 50% threshold they needed to win the seat, but he told the Thomson Reuters Foundation he had no wish to play kingmaker in the runoff.

Oliver, 37, has refused to advise his 80,000 voters on who to support when they return to the polls on Tuesday, saying it is up to them to decide.

“Libertarians believe in not holding onto power. We want to take power away from government and give it back to each and every individual person,” Oliver said in a video call from his home in the battleground state.

Recent events have shone a spotlight on another of his keenly held beliefs: the right to bear arms. On Nov. 19, a gunman shot five people dead in an LGBTQ+ club in Colorado Springs.

Oliver, who once described himself as being “armed and gay”, said he stood by gun ownership.

“I have never been shy about my positions on owning firearms,” he said in emailed comments. “I have one myself for personal protection and to protect innocent people around me.

“I hope I never have to draw my weapon in a real-life situation. But if that time comes, I will be ready and I hope others are too.”

The United States voted in the Nov. 8 midterms to elect Congress members for all 435 House of Representatives seats as well as 35 in the Senate.

The Democrats currently hold 50 seats to the Republicans’ 49 – although a 50:50 tie would be decided by the casting vote of Democrat Vice President Kamala Harris.

The predicted “red wave” of Republican victories failed to materialise in the midterms, when a record number of LGBTQ+ candidates were elected in what campaigners dubbed a “rainbow wave”.

A former Democrat himself, Oliver said he first came across the Libertarian Party, which was founded in 1971 and now has an estimated 700,000 members in the United States, at an Atlanta Gay Pride event.

An opponent of the 2003-2011 war in Iraq, Oliver became disillusioned with the Democrats over Barack Obama’s stance on the conflict, saying the former president had broken his “anti-war promises”.

“I needed (to find) a real anti-war ideology out there. And lo and behold, I was at the Atlanta Gay Pride festival in 2010 and the Libertarian Party of Georgia was there,” Oliver said.

“I spoke to their candidate for Governor and realised that they were for a more compassionate foreign policy that doesn’t rely on … just blunt force of the United States’ military to impose its will around the world.”

LGBTQ+ rights and libertarian ideals have much in common, according to Oliver, with both focused on taking the state out of people’s lives – including their bedrooms.

“As a libertarian, I’m somebody who believes you can live your life however you want,” he said.

“So long as you’re not harming me directly, or harming my neighbours or harming other people, I’m not going to have any fault with you believing or living in any way you so choose.”

LGBTQ+ rights became a hot-button issue in the midterm elections.

Since the start of the year, more than 300 bills have been introduced nationwide targeting LGBTQ+ rights, according to the Human Rights Campaign (HRC), with many aimed at limiting transgender people’s participation in school and college sport.

“I think we’re seeing a backlash,” Oliver said. “But, ultimately, I think we’re going to continue to see the movement go forward,” he added.

“As culture moves on, we’re going to see that LGBTQ people are just like us in the broad diversity of humans – and that it’s nothing to be afraid of.” 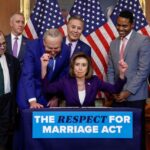