On Thursday, January 19th, Jacinda Ardern, the Prime Minister of New Zealand, announced her resignation from her position, citing that she no longer has ‘enough in the tank, to continue leading the country. As the world watches her step down from one of the most powerful positions in the world, it is worth reflecting on the legacy that Ardern has left behind.

Throughout her time as Prime Minister, Ardern advanced LGBTQ+ rights in New Zealand and showed empathy to the country’s queer community at every turn. In 2018, Ardern became the first New Zealand Prime Minister to march at Pride, showing her commitment to the LGBTQ+ community. In 2020, Ardern’s Labour Party pledged to ban conversion therapy and in February 2022, the Conversion Practices Prohibition Legislation Act received royal assent, ensuring practitioners of the pseudoscientific and harmful practice would face repercussions.

At the height of the COVID-19 pandemic, Ardern appointed Grant Robertson as Deputy Prime Minister, making him the first openly gay person to hold the role. At that time, New Zealand’s cabinet was among the queerest in the world. Ardern also displayed kindness and empathy to the LGBTQ+ community during her time as Prime Minister. She was quick to defend Olympic weightlifter Laurel Hubbard in 2021 when she was selected for the country’s Tokyo team, a move that won praise from queer people at a time when many politicians were weaponizing trans inclusion in sport. That same year, New Zealand passed vital reforms to its gender recognition laws. The bill allowed trans people to self-declare their own gender and removed the requirement for medical intervention for a person to change their legal gender.

Throughout her tenure, Ardern has been a beacon of hope and an inspiration to many. She is a leader who has shown that it is possible to be kind, but strong, empathetic but decisive, optimistic but focused. Her leadership has been a testament to the fact that one can be their own kind of leader – one who knows when it’s time to go.

In the hours after Ardern announced her resignation, tributes flooded in on social media, with many praising her for inspiring women and girls and for standing up for the most marginalized in society. Some drew attention to the relentless misogynistic abuse she faced on social media throughout her time as Prime Minister. This serves as a reminder of the work that still needs to be done to ensure that women in positions of power are not constantly subjected to such abuse.

As we bid farewell to Jacinda Ardern, we must remember the impact she has had on New Zealand and the world. Her leadership has been a shining example of empathy, kindness, and progressivism, and her legacy will continue to inspire future generations. 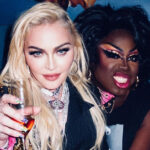 Bob the Drag Queen joins Madonna on ‘The Celebration Tour’: A match made in pop heaven