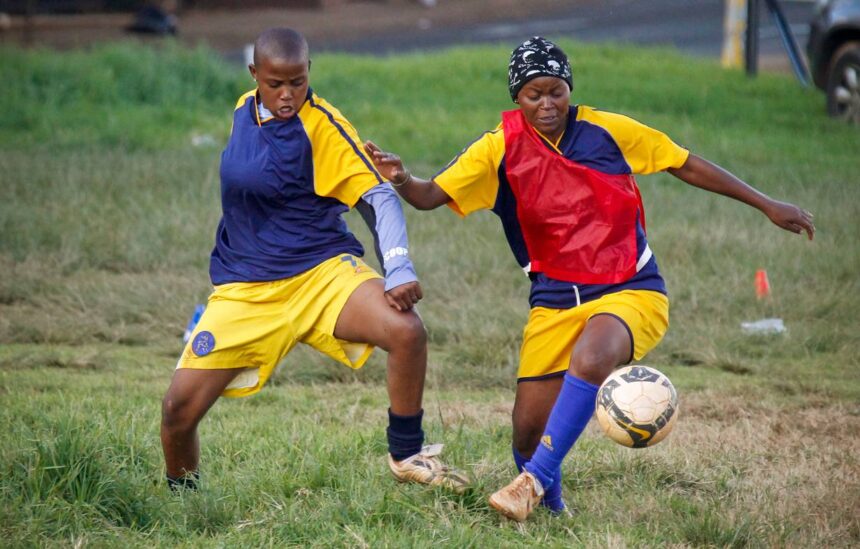 KILIFI, Kenya (Thomson Reuters Foundation) – All Imani wanted to do was to play football. But Kenyan fans, gossiping about her sexuality, had other ideas.

“That one is always with girls,” Imani overheard one man saying as she was in the middle of a match in the coastal city of Mombasa.

“Jersey number four, she is a renowned lesbian.”

There and then, Imani knew her game was over. She faked an injury and went straight home, worried for her safety in a country where discrimination against LGBTQ+ people is rife and can lead to abuse including taunts, attacks and rape.

“Those remarks got to me, and it wasn’t just because I had been outed publicly,” said Imani, who – along with other lesbian footballers interviewed by the Thomson Reuters Foundation – asked to be identified by a pseudonym.

“The spectator went on to announce … that he knew my friends and even where I lived.”

Around the world, lesbian and bisexual football players are at the forefront of top women’s teams, unlike in the men’s game where only a small number of elite players have come out.

South Africa’s Banyana Banyana team, which last month was crowned champion of the 2022 Africa Women Cup of Nations, is captained by lesbian Janine van Wyk. It is the continent’s only national team to have any openly lesbian or bi players.

There were seven openly lesbian or bisexual players on the 23-strong ‘Lionesses’ England women’s team that clinched victory over Germany in July’s Euro 2022 championships.

Megan Rapinoe, a lesbian, led the U.S. national women’s team to gold in the 2012 London Olympics and bronze in Tokyo last year. In July, she became the first football player to receive the Presidential Medal of Freedom.

While women’s football is gaining popularity in Kenya, stigma against LGBTQ+ people forces players to stay in the closet.

Secrecy is the safest choice for Kenyan female footballers who harbour ambitions of playing professionally, internationally, or in the national Harambee Starlets team.

“Lesbian players are discriminated against. So, it would be best to hide who you really are,” said Farida, 33, a retired professional footballer who kept her sexuality hidden for all of her career.

Aisha, a Kenyan semi-professional player, aspires to play football abroad not only because of the career opportunities but so that she can be her true self on and off the pitch.

She has found herself excluded during matches because of rumours about her sexuality.

“Sometimes the straight teammates ignore you on the pitch and only involve you when necessary,” Aisha said with a resigned laugh.

“If you don’t have thick skin, it will get to you and your game. I believe in myself and know I am a star and play well. So, I won’t let anyone put limits on my game.”

Coaches do not speak up for lesbian and bi players who are being bullied over speculation that they are gay – and some even sexually harass them, said Imani.

“No coach has ever stood up in defence of any lesbian players. Some even refuse to include us in their teams unless we give into their demands,” said Imani, who is semi-professional.

“They want to protect their reputation, their jobs, and are afraid of taunts from the fans.”

Some LGBTQ+ women say football has helped them find others like them and create safe havens.

Farida was shamed and threatened with expulsion by her school for being gay. But she said she found her “rainbow” people – as she describes her fellow lesbian players – after enrolling in a football talent academy.

Though the all-lesbian team is organised through the Kenyan LGBTQ+ activist group Minority Women in Action (MWA), the team does not publicise the link and keeps the details of their sexuality a secret from the wider community.

“Initially, we used the game as a tool to conduct sexual reproductive health advocacy and to build talent,” said Wanjiru.

“But it turned out to be a safe space away from the discrimination that our members were facing in their teams and the mainstream leagues.”

Within the confines of MWA’s football team, players are free from the barrage of lewd comments, threats of physical attacks or what has been termed as “corrective rape” – the attempt to make a woman straight through sexual assault.

Despite LGBTQ+ women’s secrecy, rumours and discrimination against players who don’t match up to stereotypical feminine norms mean they have struggled to get support.

Aisha, who plays for MWA, said the players have resorted to training themselves as no licensed coach will work with them. She said the team is also denied access to training grounds or sponsorship opportunities.

For lesbian or bisexual women, the only way to progress in the league is to stay in the closet, said Imani.

“It is not easy being yourself and performing,” she said. “Even though you are playing your best football, someone will still say something negative, something for people to start pointing fingers at you, and you could lose everything.”