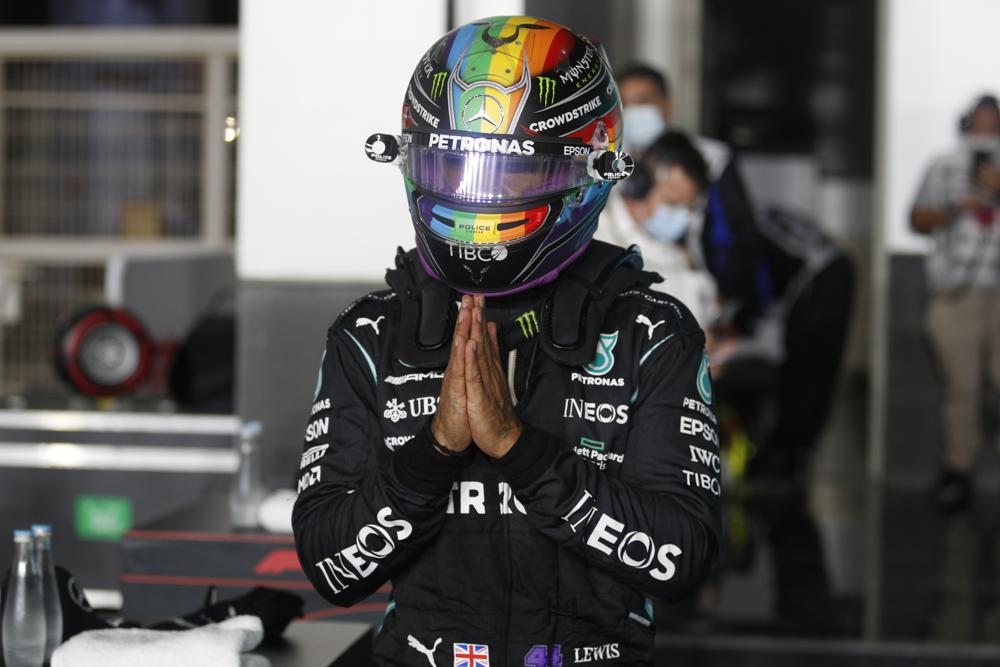 LOSAIL, Qatar (AP) — Lewis Hamilton and Mercedes moved a bit closer to reclaiming control of the Formula One championship race by quickly figuring out the newest circuit on the calendar.

Verstappen qualified second for Red Bull and Valtteri Bottas, teammate of Hamilton’s at Mercedes, was third. But both drivers, along with Carlos Sainz who qualified seventh, went in to Sunday under investigation for violating yellow flag rules in qualifying. Each was summoned to a pre-race meeting with stewards.

Verstappen already skirted a penalty once this weekend when Mercedes was denied a bid to have Verstappen retroactively penalized for running Hamilton off course last week in Brazil. Verstappen holds a 14-point lead over the seven-time champion with three races remaining.

Although their respective teams are at war, Hamilton and Verstappen are generally cordial to one another and were following Saturday qualifying despite a disagreement over the rules of racing. Stewards attempted to define the rules in a lengthy Friday driver briefing to mixed results.

“Everyone is different. Everybody, I think, has their own way of racing and defending and overtaking,” Verstappen said. “I think (the meeting) was all about sharing your opinions and the FIA explaining the process of thought behind it. I think we came a long way and it was a very long briefing. It was, at the end, pretty clear.”

The Mercedes drivers had a wildly different takeaway from the meeting.

“No, it’s not clear,” Hamilton said. “Every driver I think except for Max was asking for clarity. It’s still not clear what the limits of the track are. We just ask for consistency. If it’s the same for the last race, then that should be the same for all of us in those certain scenarios and then it’s fine.”

“I don’t think we really got an explanation what we actually can do or not,” Bottas said. “At least we know that what Lewis and Max ended up having in Brazil, that is OK. So that is a good thing to know.”

Now three drivers are facing possible penalties before Sunday’s race over their interpretation of yellow flags. The flags waved near the end of qualifying because of a punctured tire for Pierre Gasly.

Hamilton had been slowed by a stomachache, he said, when he first arrived at the circuit and he was fourth in both of Friday’s practices. He stayed late with the team working on changes as Mercedes surged ahead of Red Bull in learning the newest of four F1 circuits in the Middle East.

Hamilton was fastest in all three qualifying sessions, was the first driver to head out for a final qualifying run and was the only driver to log a lap in the 1 minute, 20-second range. He was nearly a half-second faster than Verstappen.

“That last lap was beautiful, it was a really sweet lap,” Hamilton said. “This track is amazing to drive, it is incredibly fast. It felt good.”

Red Bull didn’t have the same speed and Sergio Perez failed to even advance to the final group. Perez qualified 11th.

“It’s been just a bit more tricky for us in qualifying,” Verstappen said. “We are struggling a bit more than normal. We’ve never done a race here, so there’s a lot of unknowns.”

The race is the first in a 10-year deal between F1 and Qatar.

Hamilton, winner last week in Brazil, has been front and center in Qatar and outspoken on several issues. Hamilton debuted a helmet sporting a rainbow to recognize the LGBTQ+ community. He shared a photo of it on his social media feeds with the caption “We stand together” and said he expects to wear the helmet at upcoming races in Saudi Arabia and Abu Dhabi.

Hamilton on Friday once again spoke out on human rights issues in the region and acknowledged F1 was closing its season in places “deemed as the worst in this part of the world” regarding human rights abuses. Campaign groups have highlighted discriminatory laws against women and LGBTQ+ individuals in the Gulf state, which will also host the World Cup next year.

Hamilton said after qualifying he’d not received any negative feedback about the helmet.

“It’s important for me to represent that community. I know there are several situations that aren’t perfect and need to be highlighted,” Hamilton said.