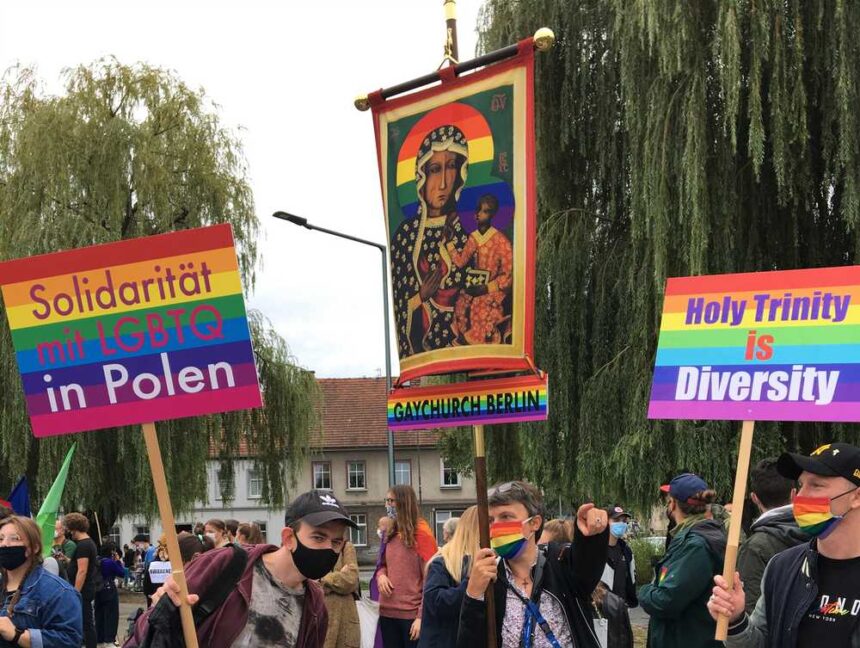 Contents
“It’s another layer of Poland.”‘LEARNING YEAR TO YEAR’‘BRAIN DRAIN’

“This sends out the message that we’re LGBTQ+ allies, and it tells kids (that) there’s a place where you can feel safe,” Kistowska, 37, who teaches English at a school in the western city of Poznan, told the Thomson Reuters Foundation.

“Success is when you support your students,” she said.

Poland’s Law and Justice (PiS) party has made anti-gay policies a pillar of its governing platform, and the nation now ranks at the bottom of the 27-member EU on legal protections for LGBTQ+ people, according to advocacy group ILGA-Europe.

But LGBTQ+ advocates hope the school survey initiative, the work of a 22-year-old gay rights campaigner, will show that not all Poles have homophobic views.

“This ranking is showing that there are actually places where we are safe, even if it’s hard,” said Bartosz Staszewski, one of Poland’s leading LGBTQ+ activists.

“It’s another layer of Poland.”

The new study ranked more than 2,500 schools, about a third of the overall total in Poland, based on the answers of over 22,000 students to a series of questions related to LGBTQ+ inclusion.

Questions ranged from the visibility of LGBTQ+ students, the attitudes of classmates and teachers, and the actions of the institutes’ school boards.

The study is the first of its kind in the EU, its promoters say, both in terms of the schools’ ranking system and the students’ participation, and there are plans to expand it across the bloc.

“We give the students a voice, because they get to assess the schools they are currently in to help the candidates that might be considering going to that same school in the future,” said the study’s creator, economics student, Dominik Kuc.

Kuc, who himself is gay, said he started the schools ranking project in 2018 while still at school to understand “why some schools were open-minded and some weren’t”.

“I was horrified by the very, very sad stories about people who unfortunately committed suicide in their schools, because of homophobia, biphobia, and transphobia in Poland.”

According to a 2021 survey among LGBTQ+ Poles by advocacy group Campaign Against Homophobia, 56% of respondents had experienced suicidal thoughts, up from 45% in 2017 and 38% in 2012.

The rights of LGBTQ+ Poles have come under increasing pressure since PiS came to power in 2015, declaring gay rights a threat to traditional life and its strongly Roman Catholic culture.

Despite the EU action, PiS last year introduced a law banning same-sex couples from adopting children in Poland, even as single parents.

PiS did not reply to a request for comment.

Kuc said he hoped his initiative would bring fresh pressure to bear on the government, and ensure that LGBTQ+ schoolchildren have their voices heard.

“If we repeat the ranking one year, the next year, and so on, the schools will start to improve their situation, because they don’t want to perform badly, so they are learning from year to year,” he said.

Asked about the initiative, a spokeswoman for the country’s Education Ministry said in a written response that Polish schools have an “auxiliary role … towards the family in bringing up children” and that “there are no grounds for assessing schools ‘to include LGBTQ+ people’”.

Many of the schools that scored highly in the survey were outside the capital, Warsaw, in smaller cities such as Poznan, Gdansk in the north and the southeastern city of Lublin.

In Lublin, 16-year-old Tosia said she was proud that her school had ranked second.

Even though she herself is not part of the LGBTQ+ community, she sent her friends and acquaintances the web link to participate in the study to raise awareness.

Many young gay, bisexual and trans Poles have moved abroad, amid reports that homophobic policies and discrimination are causing a “brain drain” and economic losses in countries such as Poland and Hungary.

Despite Warsaw’s clash with Brussels over what the EU calls “European values” and Poland’s poor LGBTQ+ rights standing, Kuc and his colleague in the ranking project, Agata Zapora, think there are signs of youth-led social change.

“When we show students that their opinions matter, they can then take action,” Zapora said.

As an example, they cite lower rates of students opting to take religious studies in schools, particularly in urban areas.

Poland’s Catholic Church often takes a stronger stance than the Vatican on social issues, with some of its senior members arguing against what they term “LGBT ideology”.

“People are not willing to have this kind of right-wing narrative in the country anymore, they want to be European,” said Kuc, whose project received funding from Brussels-based advocacy group Forbidden Colours.

The group is now working with the European Parliament and the European Commission to secure EU funding to turn the schools ranking into an EU-wide project.

A pilot project has been launched among more than 1,000 students in the Belgian capital, and Forbidden Colours is also working with LGBTQ+ groups in the Netherlands, Italy, Bulgaria and Hungary in a bid to export the model.

“The Polish students are braving the government’s narrative that LGBTQ+ rights are a Western ideology and Western propaganda,” said Remy Bonny, executive director at Forbidden Colours.

“The fact that there is a Polish project showing that Poland can also produce something very positive on LGBTQ rights, and that young people in Poland are taking up their own role in society, is inspiring.”