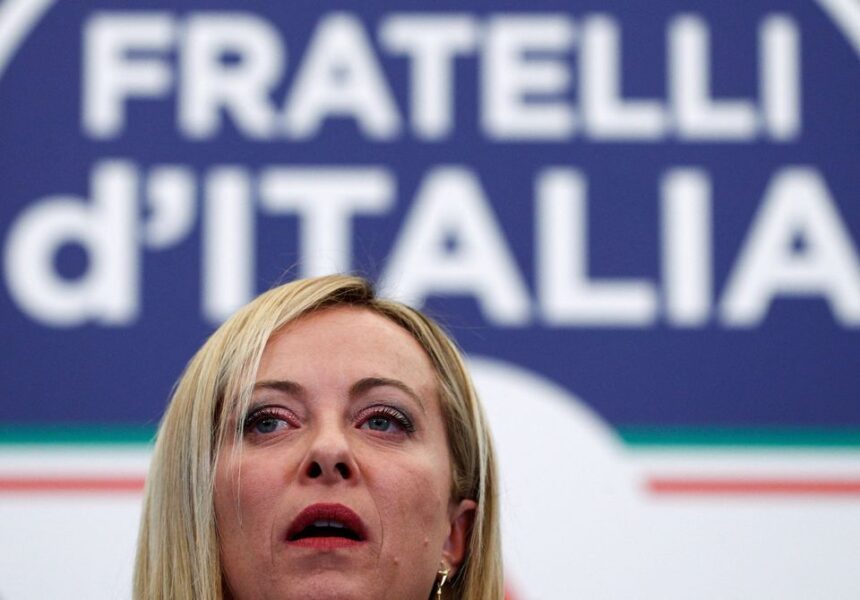 The nationalist Brothers of Italy group, led by Giorgia Meloni, emerged as the largest party in the ballot and will lead the most right-wing government in Rome since World War Two.

“Unfortunately there are very real fears” about an erosion of civil rights under the new administration, Fabrizio Marrazzo of the Gay Party said.

Meloni is allied with the League, another far-right force led by Matteo Salvini, and the mainstream conservative Forza Italia of former premier Silvio Berlusconi.

“The League and partly Brothers of Italy have in their manifestos things that are quite negative for our community, like stressing the importance of protecting only the traditional family,” Marrazzo said.

Meloni, 45, was raised by a single mother and is unmarried with one daughter. She presents herself as a defender of Christian values and an enemy of what she calls “gender ideology” and the “LGBT lobby”.

Explaining her opposition to gay parenting rights, she has said that “unlucky children” who are up for adoption “deserve the best” – meaning a father and a mother.

Meloni has denied suggestions that her socially conservative outlook would stretch to undermining or abolishing existing Italian legislation on abortion rights or same-sex partnerships.

“What is there, stays there,” she said last week.

Marrazzo, a former leader of the Arcigay LGBT (lesbian, gay, bisexual and transgender) association who unsuccessfully stood in the Sept. 25 election, said he was most concerned about the cultural signals coming from the right.

He said it might become harder to run anti-LGBT discrimination programmes in schools and said there had been an increase in the past in homophobic attacks in Italian cities and regions with right-wing administrations.

Pro Vita & Famiglia, a conservative Catholic lobby that is highly suspicious of sex education in schools, has called on the new government to pick an education minister opposed to “any gender and LGBT ideological colonisation in schools”.

Meloni is not expected to take office before late October, so it is too early to say whether she will heed the advice. Meanwhile, her party’s culture spokesman caused a stir by saying last week that gay couples “are not legal”.

Federico Mollicone later clarified he was referring only to gay couples who adopt. He also said his party supports same-sex partnerships – despite having voted against their introduction in 2016 – and “is against all discrimination”.

Meloni’s aide also stood by a call to censor an episode of the popular children’s cartoon “Peppa Pig” which featured a polar bear with two mothers, saying gay parents cannot be presented to minors “as an absolutely natural fact”.

But surveys suggest most Italians are more relaxed.

In June, an Ipsos poll showed that 63% of Italians backed marriage rights for gay people, up 15 points from 2013, and 59% were in favour of gay adoptions, an increase of 17 points from nine years ago.