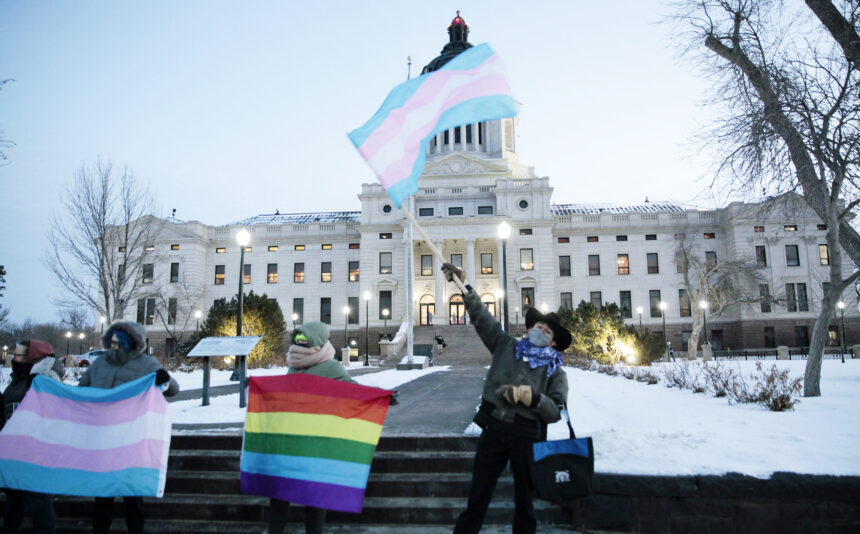 A group of LGBTQ advocates gathered outside the South Dakota Capitol in Pierre on Tuesday, Jan. 26, 2021, to protest a bill that would have banned people from updating the sex on their birth certificates. (AP Photo/Stephen Groves)

As more than a dozen states consider passing anti-transgender legislation this year, North Dakota lawmakers rejected a bill Friday that would have made people pay $1,500 each time they refer to themselves or others with gender pronouns different from the ones they were assigned at birth.

“The main purpose of the bill was to eliminate state funding for entities including education that would promote, allow or support the ideology of transgenderism,” said Republican sponsor Sen. David Clemens, of West Fargo. Others testified at a Wednesday Senate Judiciary Committee hearing that the bill is designed to discriminate, and could impact the state’s behavioral health providers.

The vote tally came to 39 senators against the bill and eight in favor.

Members of the Senate Judiciary Committee had said they agreed with the bill’s purpose, but that it was poorly written and would be difficult to enforce. It would also have harmed people who do not identify as transgender and would possibly violate First Amendment rights, they said.

Reed Eliot Rahrich, who identifies as transgender, added that the bill is “a poorly thought out affront to human rights.”

Dan Cramer, a psychologist and clinical director at the state Department of Health and Human Services, said it would create “significant problems” for human service centers in meeting basic accreditation standards and funding requirements. Those standards prohibit discrimination against a client’s sexual orientation and gender identity.

Republican Sen. Janne Myrdal, of Edinburg, voted against the bill, but said she plans to support others that align with her belief “that God gives you your identity and your sex at conception.”

More than two dozen bills seeking to restrict transgender health care access have been introduced in at least 11 other states — Kansas, Kentucky, Missouri, Montana, New Hampshire, Oklahoma, South Carolina, Tennessee, Texas, Utah and Virginia — for the legislative sessions beginning in early 2023. Bills targeting other transgender issues have been filed in many of the same states and are expected in several others with GOP majorities.

Rahrich, who testified against the bill, said he lived in North Dakota until he was 25 but moved away in 2016 after “a series of escalating brushes” with anti-LGBTQ violence.

“I could wax poetic about the rolling prairie, or how much I miss the enormity of the sky,” he said about North Dakota. “But what I can’t do is compel you to see me as a human being.” 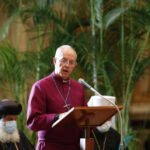 Church of England apologizes for treatment of LGBTQ people
Next Article