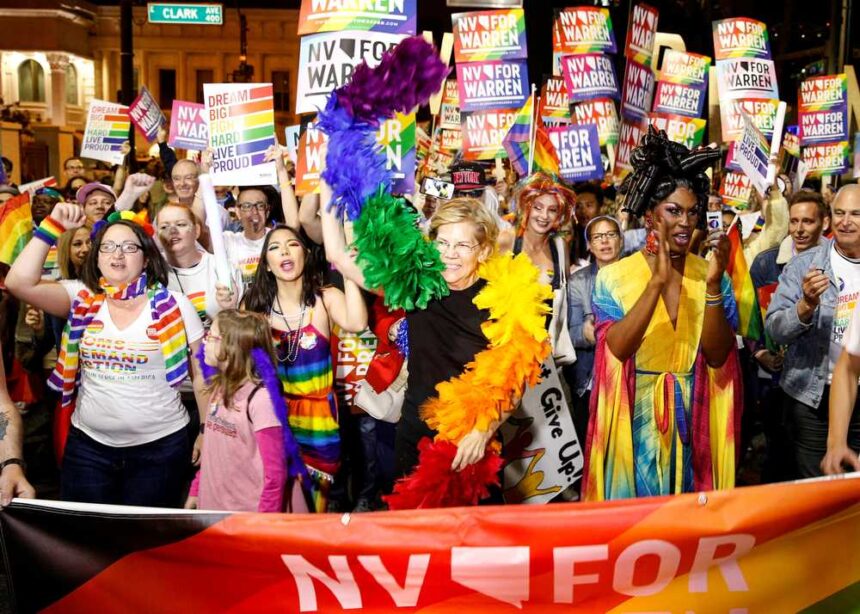 NEW YORK, Nov 18 (Thomson Reuters Foundation) – A “rainbow wave” that lifted record numbers of LGBTQ+ candidates to victory in the U.S. midterms is a promising sign of growing acceptance, but tough legislative fights still lie ahead in many Republican-controlled states, rights campaigners said.

Even as Republicans gained a slim majority in the House of Representatives on Wednesday, the absence of the predicted “red wave” could act as a buffer against anti-LGBTQ+ legislation in the new Congress that will be sworn in on Jan. 3.

“The Democrats in the House and Senate have been our firewall,” said Zeke Stokes, a political consultant and the former chief programs officer at the LGBTQ+ advocacy group GLAAD.

On Wednesday, the Senate advanced a bill protecting same-sex marriage with a 62 to 37 procedural vote, including all Democrats and 12 Republicans — two more than needed for its ultimate passage.

The House has already passed a version of the “Respect for Marriage Act”, which would ensure that if the Supreme Court overturns same-sex marriage legalization, it would be federally protected. Democrats had hoped to garner greater Republican support for the bill by delaying the Senate vote until the post-election legislative session.

The Democrats’ continued majority in the Senate is also crucial, political analysts said, for President Joe Biden’s ability to appoint judges sympathetic to LGBTQ+ rights during the second half of his term.

Voters’ rejection of some far-right Republican candidates was, by extension, a win for the LGBTQ+ community, said Sean Meloy, vice president of political programs at the Victory Fund, which backs gay, bisexual and transgender candidates.

“In a cycle when Republicans used anti-LGBTQ+ rhetoric, particularly anti-trans rhetoric to a level we haven’t seen before … it’s a pretty swift repudiation of that tactic,” Meloy told the Thomson Reuters Foundation.

Despite the midterm boost, however, LGBTQ+ rights campaigners cautioned that Republican-led state houses would press on with conservative bills on LGBTQ+ issues.

Since the start of the year, more than 300 bills have been introduced nationwide targeting LGBTQ+ rights, according to the Human Rights Campaign (HRC), with many aimed at limiting trans participation in school and college sport.

“The LGBTQ community is living in a state of emergency,” said Geoff Wetrosky, the HRC’s campaign director.

The day after the midterm elections, Republican lawmakers pre-filed legislation in Tennessee to ban treatment of gender dysphoria in minors as well as “prurient” drag shows in public or in private venues where minors could be present.

In 21 states, Republicans control both houses of the legislature and the governorship, essentially giving them free rein to enact anti-LGBTQ+ policies. Democrats hold all three in just 17 states.

The Democrats flipped legislative chambers in Minnesota and Michigan, meaning they control both houses and the governorship, and may flip the Pennsylvania House.

“If you win (any of the) chambers, you can fight and get things done at a different level,” she said.

A record 466 openly LGBTQ+ candidates won their election races as of Thursday, up from 336 wins in 2020, according to the LGBTQ Victory Fund, which said their triumphs marked a “rainbow wave.”

In total, 1,065 openly LGBTQ+ candidates have run for office this year across the United States – another record, the Victory Fund reported.

Maura Healey of Massachusetts and Tina Kotek of Oregon, both Democrats, will become the nation’s first openly lesbian governors.

Four openly gay men and women will newly join the House, including George Santos of New York, a Republican, as well as Democrats from California, Illinois and Vermont.

They will join the eight out of nine openly gay U.S. representatives, all Democrats, who won re-election.

“LGBTQ identities become a footnote rather than a headline,” said Stokes.

Still, Turner said Kotek’s victory, even in a state as progressive as Oregon, came only in spite of her sexual orientation.

“I can’t tell you how many people along the way, even from our own community, said, ‘Can Tina really win?’” Turner said.

An HRC analysis released in October found that right-wing political groups and candidates spent more than $50 million on anti-LGBTQ+ political advertising ahead of the midterms, particularly targeting trans youth.

Polls indicate that acceptance of trans people lags behind that of gays and lesbians in the United States.

But the right-wingers’ tactic proved largely ineffective, the HRC said, with nearly all conservative candidates who relied on such anti-LGBTQ+ messaging losing.

Four Democratic governors who vetoed or opposed anti-trans legislation, Laura Kelly of Kansas, Gretchen Whitmer of Michigan, Janet Mills of Maine and Tony Evers of Wisconsin, were all re-elected.

Florida Republican Senator Marco Rubio, who coasted to re-election victory, spent the most of any one candidate in HRC’s analysis, with more than $7 million on ads targeting trans rights.

Rubio did not respond to a request for comment.

Governors Gregg Abbott of Texas, Ron DeSantis of Florida and Kristi Noem of South Dakota have each backed anti-LGBTQ+ policies. Each won re-election by a wide margin.

Wetrosky said that given these politicians’ apparent presidential aspirations, they are “making a play for those Republican base voters” by pursuing policies that curtail the rights of LGBTQ+ Americans.

Pointing to the decades-long battle conservatives successfully waged to overturn Roe v. Wade, which established the legal right to abortion, Stokes said members of the far right were unlikely to be swayed by the outcome of the midterms.

“They don’t see these election losses as signals that they’re on the wrong side of history, they simply see them as part of the path to victory.”