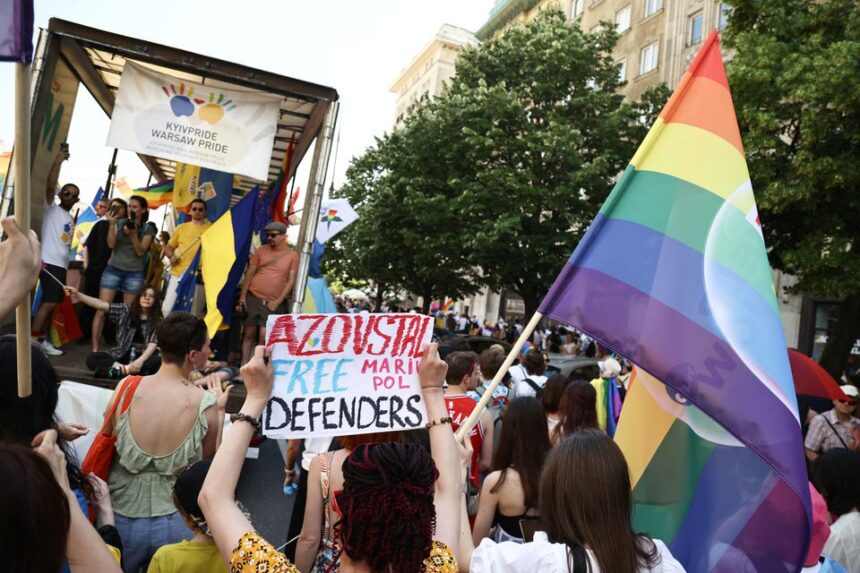 WARSAW (Reuters) – Thousands of Poles and Ukrainians are walking for peace and demanding an end to discrimination against the LGBT+ community on Saturday, in a joint Pride march in Warsaw that organisers say aims to defend freedom and equality as war casts a shadow over eastern Europe.

The annual Pride march in the Ukrainian capital of Kyiv was cancelled due to Russia’s invasion, leading the LGBT+ community in Warsaw to team up with their counterparts in Ukraine to organise the event in the Polish capital.

“Russia denied us the right that we were fighting for for years, Russia denied us the Pride, our march of equality that we are holding every year since 2012 in Kyiv. … That is why we are marching in Warsaw,” said Lenny Emson, executive director of KyivPride, who came to Poland for the march.

Conservative attitudes towards sexual orientation are widespread in both countries. Poland’s ruling nationalists have made battling what they call “LGBT ideology” a key plank of election campaigns, while in Ukraine far-right groups regularly targeted LGBT+ campaigners and events before the war.

But with many LGBT+ people in Ukraine signing up to fight for their country, activists have said they hope the war can help to erode prejudice.

“People who are ready to die to defend this country, I think they have the right to be equal, to have for example civil unions,” said Temur Levchuk, an LGBT+ activist in Kyiv. He was unable to attend the Warsaw march due to a law preventing Ukrainian men aged 18-60 from leaving the country.

Moscow began what it calls its “special military operation” on Feb. 24, saying it wanted to ensure security at its borders. Kyiv and the West say President Vladimir Putin launched an unprovoked invasion.

For some LGBT+ Ukrainians, the fact that Putin has curtailed the rights of their community in Russia gave them more reason to fight.

Olena Mykal, a 29-year old marketing manager at an IT company from Kiev, who fled Ukraine in March, said marching in Warsaw was an act of solidarity with the LGBT+ community in their home country. “I’m here because I can’t go to the parade in Ukraine. We’re all people regardless of who we love.” Mykal told Reuters minutes before the march started.