British Prime Minister Rishi Sunak is poised to block Scottish laws that make it easier for people to change their gender, The Times reported on Friday.

The new legal advice will pave the way for the government to stop Scotland’s First Minister Nicola Sturgeon’s gender recognition laws from getting royal assent next week, the newspaper said.

Sunak will make a final decision with Scotland Secretary Alister Jack next week on invoking section 35 of the 1998 Scotland Act, which will prohibit Holyrood’s presiding officer from submitting the bill for royal assent, the report added. 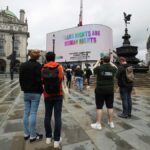