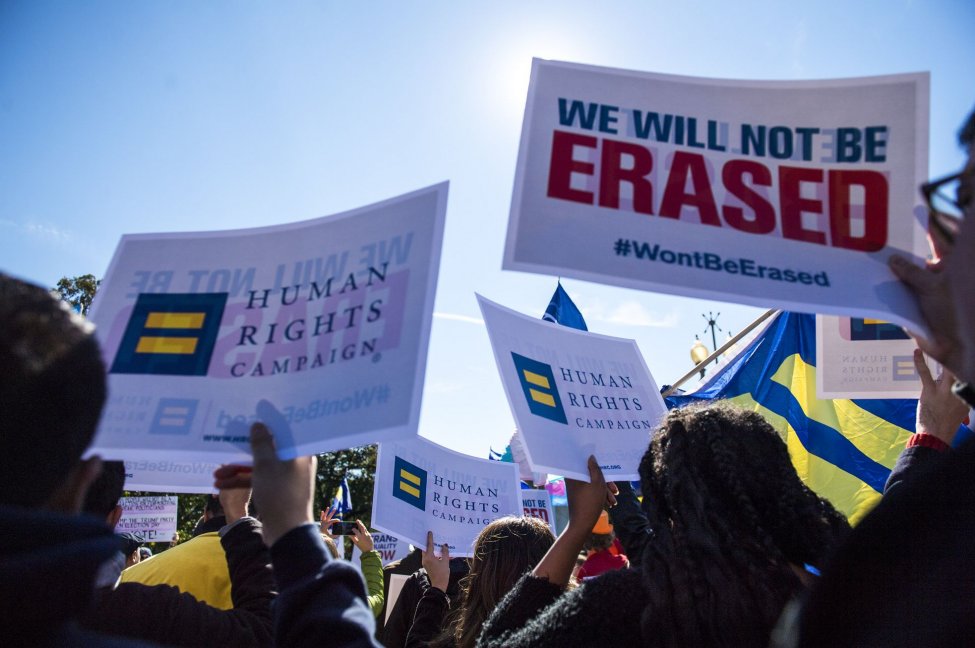 In a 3-0 ruling, the court says the provision — which was enacted in 2017 by the state Legislature as part of the Lesbian, Gay, Bisexual and Transgender Long-Term Care Facility Residents’ Bill of Rights — violates the employees’ freedom of speech.

Intentionally using the wrong name or pronouns was a misdemeanor with a maximum punishment of 180 days in jail and a $2,500 fine.

“We recognize that misgendering may be disrespectful, discourteous and insulting and used as an inartful way to express an ideological disagreement with another person’s expressed gender identity,” Justice Elena Duarte wrote for the court. “But the First Amendment does not protect only speech that inoffensively and artfully articulates a person’s point of view. At the very least, willful refusal to refer to transgender persons by their preferred pronouns conveys general disagreement with the concept that a person’s gender identity may be different from the sex the person was assigned at birth.”

Duarte also wrote that the provision restricts more speech than is necessary to achieve the government’s compelling interest in eliminating discrimination and harassment on the basis of sex.

In a concurrence, Justice Ronald Robie wrote “to not call one by the name one prefers or the pronoun one prefers, is simply rude, insulting and cruel.”

However, he also said that instead of mandating employers ensure the use of proper pronouns in the workplace, the California Legislature “unwisely” made their misuse a crime.

“When we rule this law cannot stand, we do not reject the need for persons to use appropriate pronouns but, in my opinion, are suggesting that the Legislature fashion a workable means of accomplishing the laudable goal of the legislation,” Robie wrote.

The decision upholds a separate provision mandating that when assigning rooms based on gender, long-term care facilities and their staffs must make decisions based only on a transgender resident’s gender identity.

The California Attorney General’s Office, which defended the law, is reviewing the decision, according to an email from its press office.

Rick Chavez Zbur, executive director of Equality California, which sponsored the legislation, said the decision is disappointing, especially for the transgender and nonbinary seniors.

Refusing to use someone’s correct name and pronouns isn’t an issue of free speech but a “hateful act that denies someone their dignity and truth,” he said

“Study after study has shown that trans people who are misgendered face alarming and life-threatening rates of depression and suicidal behavior,” Zbur said in an email. “And older LGBTQ+ people face feelings of isolation, poor mental health and extreme vulnerability to communicable diseases like COVID-19. California’s nursing home patients deserve better than this — and we’ll be fighting until this decision is overturned.”

An entity called Taking Offense — which the ruling describes as an “unincorporated association which includes at least one California citizen and taxpayer” — filed suit in 2017 seeking a declaration that the two provisions are unconstitutional.

The association argued the room assignment provision is a violation of the First Amendment right to freedom of association. It also said the pronoun provision is vague and overbroad and violates staff members’ rights to free speech, free exercise of religion and freedoms of thought and belief.

The pronoun provision “requires a traditional religious Christian, Muslim, Jew or believer in any other religious faith that affirms ‘conforming’ doctrines regarding sexual roles, gender identity and gender expression as the will of God, binding on believers’ consciences, to deny their faith and to blaspheme against their religion and conscience in order to work at a licensed long-term care facility in California, with no provision in the law for a ‘reasonable accommodation’ to protect the rights of such religious employees,” Taking Offense claimed.

After a Superior Court judge in Sacramento denied the association’s request to overturn the provisions, Taking Offense appealed.

David Llewellyn, a Fair Oaks, Calif., attorney for Taking Offense, said Monday his office is not doing interviews about the case.

“My only comment is that free speech should not be subject to criminal penalties, regardless of its content,” Llewellyn said in an email.

State Sen. Scott Wiener, D-San Francisco, who authored the legislation, told UPI that he strongly disagrees with the ruling.

“The law does not penalize someone for a slip of the tongue,” he said, adding the pronoun provision stops staff members from deliberately misgendering transgender residents, an action that he describes as “straight-up harassment.”

“These are some of the most vulnerable members of our society,” Wiener said. “I am committed to continue the fight for these seniors.”

Pronoun use has been at the center of other lawsuits.

Tanner Cross, a physical education teacher in Virginia, sued after Loudoun County Public Schools suspended him in May for conduct that allegedly had “a disruptive impact on the operations of Leesburg Elementary School.”

During a public comment period at a school board meeting, Cross spoke against a proposed policy that would require transgender students to be addressed by their preferred pronouns. The teacher said it was against his religion to use pronouns that do not correspond with a student’s biological sex.

A judge ruled in June that Cross had been speaking on a matter of public concern as a citizen, rather than in his official capacity, and ordered him reinstated pending resolution of the lawsuit.

In 2018, Nicholas Meriwether, a philosophy professor at Shawnee State University in Portsmouth, Ohio, was disciplined for declining to address a transgender student with female pronouns as required under the school’s gender identity policy.

Meriwether, a devout Christian, said he offered to call on the student using her last name alone, but the compromise was unacceptable to university officials and a warning letter was put in his file, according to court documents.

The warning letter will make it difficult, if not impossible, for him to obtain a position at another institution once he retires from Shawnee State, Meriwether said. He filed a lawsuit accusing the university of violating his free speech and free exercise of religion rights. The case is pending.