Edwin Chiloba has been described as "an amazing human"

NAIROBI (Reuters) – One of the suspects in the death last week of prominent Kenyan LGBTQ rights campaigner Edwin Chiloba is his roommate with whom he is “believed to have been in (a) close relationship,” the police said on Monday.

Chiloba’s body was found in a metal box after being dumped out of a vehicle. His death sent shockwaves through the LGBTQ community in Kenya, where homosexuality is taboo and gay sex is punishable by 14 years in prison, although that law is rarely enforced.

A police affidavit released by a court in Chiloba’s hometown of Eldoret on Monday said he is believed to have died in the home he shared with one of the suspects, Jacktone Odhiambo.

It said Odhiambo and four other suspects “as per their statements, helped in moving, loading and probably dumping of the metallic box carrying the remains of the deceased from the vehicle”.

The police said they would hold the five suspects for 21 days as they continue their investigation.

The suspects were not represented by lawyers. Two of those arrested were minors, according to a source with direct knowledge of the case.

A coalition of rights groups including Amnesty International Kenya commended the police on Monday for their swift investigation.

They urged authorities in a statement to do the same when conducting investigations into the deaths of other LGBTQ Kenyans, which they said have often been treated with laxity.

“The killing of Edwin Chiloba exposes the rise in Sexual and Gender-Based Violence, and Intimate Partner Violence experienced in Kenya,” the statement said. Over 2,000 join LGBTQ march in New Delhi after COVID break
Next Article 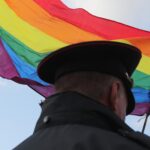