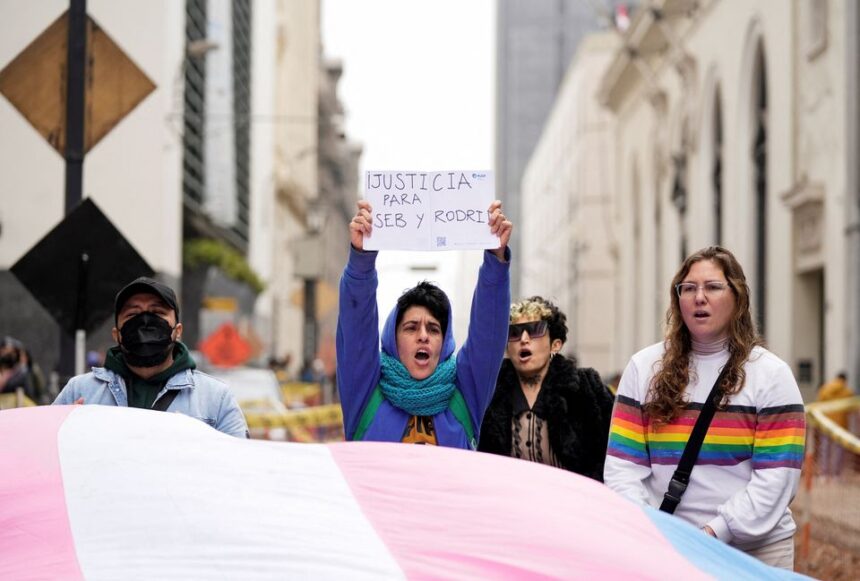 A demonstrator holds up a sign reading: "Justice for Seb and Rodri" during a protest to demand justice for Rodrigo Ventosilla, a Peruvian graduate student at Harvard and activist for transgender rights who died on the island of Bali days after being detained for alleged cannabis possession along with his husband, outside Peru's foreign ministry building, in Lima, Peru August 26, 2022. REUTERS/Angela Ponce
SHARE

LIMA (Reuters) – LGBT activists in Peru held a protest on Friday questioning how their government handled the death of a Peruvian transgender man in Indonesia earlier this month who was detained at the airport upon arriving to celebrate his honeymoon.

Rodrigo Ventosilla, a Peruvian graduate student at Harvard University and transgender rights activist, died on the tourist island of Bali of “bodily failure” days after being detained for alleged cannabis possession.

Peru’s foreign ministry issued a statement this week calling Ventosilla’s alleged drug possession a serious crime in Indonesia and that transphobia had not been a factor in his arrest, but did not acknowledge he had later died while in custody.

“We reject and condemn the foreign ministry’s statement,” said LGBT activist Luz Manriquez at a small protest in Lima.

Manriquez said the government’s statement was biased because it adopted Indonesia’s position and did not demand an investigation.

“It lacks empathy because it does not recognize that a Peruvian has died in the hands of police from another country,” Manriquez added.

Brenda Alvarez, a lawyer for Ventosilla’s family, told reporters on Friday the foreign ministry had agreed to apologize over the statement and launch an investigation.

Peru’s foreign ministry could not be reached for comment.

Alvarez added there is no date for when Ventosilla’s body will arrive in Lima.

The Indonesian police told Reuters this week the case is closed and that no violence was involved in Ventosilla’s death.

“Even if you are detained in another country, it is unreal and painful that (the Peruvian government) can leave you like this,” said Arturo Davila, a member of Diversidades Trans Masculinas, a trans rights organization that Ventosilla founded seven years ago in Peru.