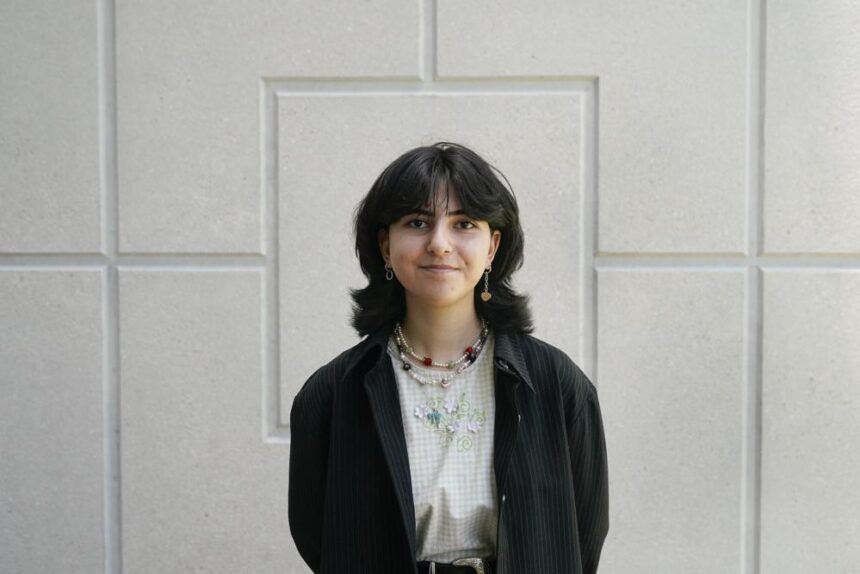 Sabrina Hodak, 19, poses for a photo, Wednesday, June 22, 2022, in Miami. Hodak, who identifies as both Modern Orthodox Jewish and bisexual, has dedicated her energy and time to exploring her faith and her sexual identity by asking questions and seeking mentors. Now, she is excited to serve as a mentor to fellow youth and share the knowledge and perspective she gained over the last few years. (AP Photo/Wilfredo Lee)
SHARE

Sabrina Hodak grew up in a Modern Jewish Orthodox family but only truly embraced Judaism at age 16, around the same time she understood she was bisexual.

It was an upsetting and confusing time, because the same religious mentors who helped her strengthen her beliefs kept saying her sexuality would conflict with her faith.

“That was very frustrating, because I also knew that a lot of other religious people believed that,” said Hodak, now a 19-year-old psychology major at Florida International University. In her journal, she kept asking, “Can I please just find someone who’s like me — who wants to be religious and is able to embrace their queer identity?”

Hodak found the support she needed by joining Beloved Arise, a Christian nonprofit dedicated to celebrating and empowering LGBTQ youth of faith. It’s one of a number of online groups whose members are sharing their stories during Pride Month as part of a campaign aimed at encouraging others who have been shunned by religious communities.

In video and written testimonies, the young advocates’ message to their peers also comes at a crucial moment for LGBTQ youth as states like Florida and Texas are adopting legislation or policies that critics say marginalize them.

I want to show that these identities aren’t a contradiction and for younger people to know that there’s hope,” said Hodak who in addition to Beloved Arise belongs to another group, Jewish Queer Youth.

Florida’s legislation, dubbed the “Don’t Say Gay” law by critics, bars instruction on sexual orientation and gender identity in kindergarten through the third grade. Supporters say parents, not teachers, should broach these subjects with children; opponents say the law demonizes LGBTQ people by excluding them from classroom lessons and recently sued to block it.

In Texas, meanwhile, the state child welfare agency has been ordered to investigate reports of gender-confirming care for minors as abuse, a directive that opponents say is a first of its kind by any governor amid widespread GOP efforts to restrict transgender rights.

“Texas is definitely one of the hot spots for anti-LGBTQ rights … and that has definitely been really hard, especially given that my faith can also be similar — not the most accepting,” said Roswell Grey, a 16-year-old from Sherman, Texas who identifies as queer and nonbinary and was raised in The Church of Jesus Christ of Latter-day Saints.

The Utah-based religion, also known as the Mormon church, has tried in the last decade or so to create a more welcoming environment for LGBTQ members. Still, some church stances remain painful for many LGBTQ members, such as its teaching that while being gay is not a sin, engaging in same-sex relationships is against God’s commandments.

“It’s really difficult to not act upon who I am and not to be who I am,” Grey said.

He was recently named a Beloved Arise youth ambassador and has shared his story as part of the campaign through interviews and social media, in hopes of inspiring other young queer people of faith and remind religions that reject them that they should be welcoming.

“The original church that Christ created on Earth was really diverse. He taught sex workers and he taught disabled people, anyone and everyone,” said Grey, who is also a member of the Rainbow Connection, a group that focuses on queer young people in his faith.

Some major Christian denominations, including the Catholic Church and the Southern Baptist Convention, condemn same-sex unions and say all sexual activity outside of a marriage between a man and a woman is sinful. But thousands of houses of worship, including many mainline Protestant churches and synagogues, have LGBTQ-inclusive policies.

Another who has been telling her story publicly is 21-year-old Lily Clifford, also a youth ambassador for Beloved Arise, who was raised Southern Baptist in Missouri in what she called a “very fundamentalist, very homophobic” environment where she often heard that gay people would end up in hell.

Last year Clifford, who identifies as pansexual, came out while attending Multnomah University in Portland, Oregon, and began a club on campus with other queer youth of faith. Meetings are private because they fear reprisals from other students at the Christian college.

“If you have everyone telling you that God hates you and you’re going to hell and your family disowned you, or you get fired from a religious job … it causes a lot of depression and you feel isolated,” Clifford said. “So just one person telling you God does love you … listening to you, can make all the difference.”

Christine Wehner, 22, grew up in northern Virginia and attended a Presbyterian church with her family until she came out as gay in 2019, during college. As a child she never questioned her church’s teachings that homosexuality was a sin, she said.

“Once I realized I was gay, two core identities — my sexuality and my faith — felt like they were in deep conflict. I felt like I had to choose one or the other,” she said via email. “But I couldn’t; they were both too deeply ingrained in who I am.”

The result was feelings of guilt, shame and cognitive dissonance that took years to overcome through prayer, therapy and guidance from mentors that helped her reconcile her queerness. She is not involved with the awareness campaign but spoke to The Associated Press with a similar aim of inspiring others.

“Seeing someone in a happy, healthy, God-honoring queer relationship may help relieve that shame for someone watching,” Wehner said. “Similarly, queer people who aren’t Christians might be able to have a more positive experience of Christianity.”