WARSAW (Reuters) – A Polish court ruled on Tuesday that an IKEA manager who dismissed an employee for posting anti-LGBT comments on an internal work forum was not guilty of religious discrimination.

The ruling upheld the findings of a lower tribunal in February after the manager, referred to as Katarzyna N, was taken to court by prosecutors and Ordo Iuris, an ultra-conservative Catholic legal organisation and think tank known for its anti-LGBT and anti-abortion activism.

LGBT rights have become a flashpoint in Poland between liberals and religious conservatives. The ruling Law and Justice party says lesbian, gay, bisexual and transgender (LGBT) “ideology” is an invasive foreign influence that undermines traditional values in the staunchly Catholic country.

In its decision, the regional court in Krakow said it had not found evidence of religious discrimination or any hidden motives behind the dismissal.

“This is an extremely strong message, the court clearly indicated that the prosecutor’s appeal ignored the question of respect for LGBT people,” Daniel Ksiazek, Katarzyna N.’s lawyer told Reuters, adding his client had lived in uncertainty for three years, fearing she may face up to two years imprisonment.

Maciej Kryczka, a lawyer with Ordo Iuris, said it would seek a written explanation of the decision and then decide whether to try to appeal, adding it was also waiting for the verdict in a case against IKEA at an employment tribunal.

IKEA said in a statement on its website that its aim was “to create a diverse and inclusive workplace … where “everyone feels welcome, accepted and respected”.

IKEA fired the employee in 2019 days after he wrote that “accepting and promoting homosexuality and other deviations is scandalous”, a comment he made on the International Day Against Homophobia, Transphobia and Biphobia. The employee also cited excerpts from the Bible condemning sexual relations between men. 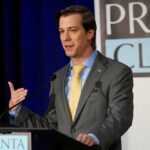 Georgia runoff: The ‘armed and gay’ Libertarian behind the rematch