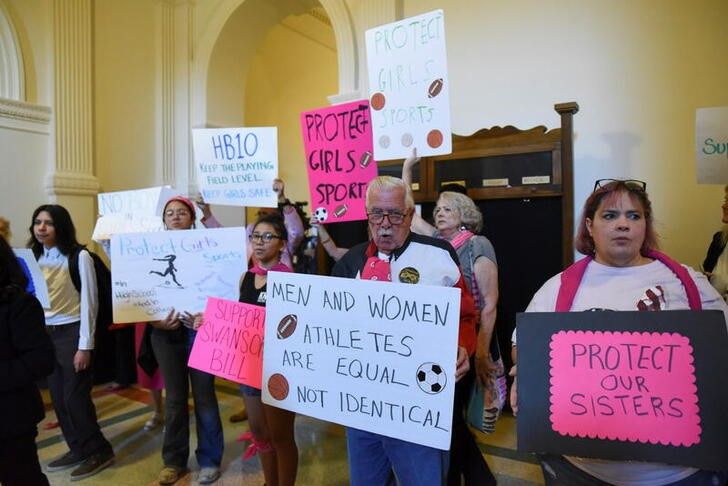 (Reuters) – A Utah judge on Friday blocked a state law banning transgender girls from participating in girls’ school sports from being enforced while he considers a lawsuit by three transgender students challenging the law.

Utah’s state legislature passed the law earlier this year, arguing that it would help protect athletes and ensure women were not edged out of their sport.

But Judge Keith Kelly of the Third Judicial District Court in Salt Lake City ruled that transgender girls did not necessarily have an automatic advantage over other girls, since puberty-blocking treatments can prevent them from developing the physical advantages for sports that boys can have.

With the ban blocked for now, Utah law states that transgender girls’ eligibility to participate in girls’ sports will be decided by a state-created commission on a case-by-case basis.

“The negative impact of the ban on these girls has been profound, and they are all breathing much easier now that it has been blocked,” said Shannon Minter, legal director of the National Center for Lesbian Rights, which represents the plaintiffs. “We are very grateful for the court’s decision and looking forward to putting an end to this law once and for all.”

A spokesperson for Utah Attorney General Sean Reyes declined to comment on the ruling.

Following a series of sporting victories by trans women athletes, including a collegiate swimmer, some conservatives and women’s sports advocates have called for more restrictive legislation. Utah’s ban was passed over the veto of Governor Spencer Cox, a Republican, in March, who argued that it applied to very few students.

The U.S. Centers for Disease Control and Prevention estimated in 2019 that just 1.8% of high school students in the country are transgender, and the Human Rights Campaign has said that, according to surveys, only about 12% play on girls’ sports teams.