On Thursday night, RuPaul’s Drag Race legend Jinkx Monsoon made an appearance on Late Night with Seth Meyers and delivered a masterful impression of actress and gay icon Jennifer Coolidge. Monsoon, who recently made her Broadway debut as Chicago’s Matron “Mama” Morton, showed off her impressive range of impersonations during her visit to the show.

After revisiting her previous Snatch Game impressions of Judy Garland and Natasha Lyonne, Monsoon was challenged to take on Coolidge, who has been feeling the love recently after winning a Golden Globe and Critics Choice Award for her role in The White Lotus. Without hesitation, Monsoon adopted Coolidge’s signature squint and delivered a pitch-perfect impression of the actress.

The drag queen also discussed how the 2002 film adaptation of Chicago starring Renée Zellweger and Catherine Zeta-Jones was the inspiration for her to start doing drag. Monsoon explained that at 15 years old, watching the film made her realize that the roles she should be playing were those of women, and two weeks later, she became a fully-fledged drag queen.

Monsoon’s Broadway debut in Chicago has been met with critical acclaim and multiple standing ovations. The All Stars 7 winner is the first drag queen to take on the role of Mama, further cementing the musical’s status as the longest-running revival in Broadway history.

As Monsoon continues to star in Chicago on Broadway until March 12th, audiences can expect to be wowed by her impressive range of talents, both on and off the stage. The Backlash Against Drag Performances: An Attack on Free Expression
Next Article 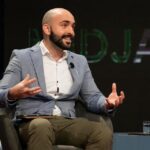