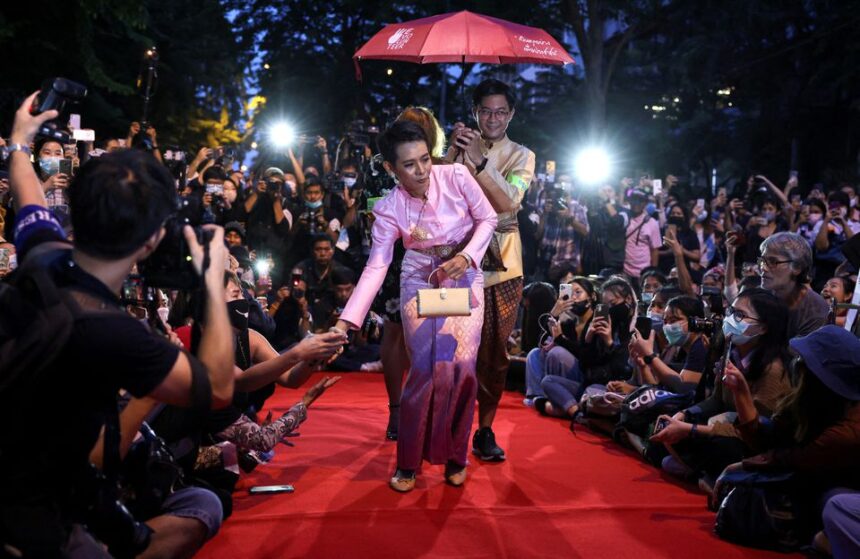 Protesters perform on a red carpet while taking part in a protest against the government and to reform monarchy in Bangkok, Thailand, October 29, 2020. REUTERS/Athit Perawongmetha/File Photo
SHARE

BANGKOK (Reuters) – A Thai court sentenced a political activist to two years in prison on Monday for insulting the monarchy, her lawyer said, after the activist was judged to have dressed as Queen Suthida during a street protest the court ruled mocked the royal family.

It is a crime in Thailand to defame or insult the king, queen, heir or regent, with punishments of up to 15 years in prison under what are among the world’s strictest “lese majeste” laws.

Jatuporn “New” Saeoueng, 25, was found guilty of intentionally mocking the monarchy by her actions during a Bangkok street protest in 2020, according to her lawyer, Krisadang Nutcharat.

She is one of at least 210 activists who have been charged with royal insult in the last two years related to protests calling for reform of the powerful monarchy, according to legal aid group Thai Lawyers for Human Rights, which tracks such cases using police and court records. Reuters was not able to independently confirm those records.

The palace, which has repeatedly declined to comment on the protests, could not be reached for comment on Monday. King Maha Vajiralongkorn in November 2020 said when asked by Britain’s Channel 4 News about the protesters: “We love them all the same”.

Jaturporn in October 2020 walked a red carpet at a protest wearing a traditional pink silk dress shaded under an umbrella held by an attendant, while protesters sat on the ground in a manner that Thai traditional culture demands in the presence of royalty – a display many interpreted as portraying the queen.

“Jatuporn has denied the charges all along and said she puts on traditional Thai dress normally,” Krisadang said.

“But the court sees it as mockery and defamatory towards the monarchy,” he said, adding that his client, who is transgender, would appeal the ruling. She was sentenced to serve in a women’s prison.

The court could not be reached for confirmation of the sentence. Thailand’s courts typically do not publicise legal proceedings.

For decades, traditional culture in Thailand has revered the king. In 2020, political protests against military meddling in government morphed into criticism of King Vajiralongkorn, 70, who took the throne after the 2016 death of his widely respected father, who reigned for 70 years.

The protesters contended that the military had justified repeated seizures of power – including army coups in 2006 and 2014 – as necessary to defend the monarchy. The government and military have denied that accusation.

The protesters also have criticized new powers King Vajiralongkorn assumed after he took the throne, including announcements in the official Royal Gazette giving him direct control of the vast wealth of the crown and at least two army units. The palace has not responded to those criticisms.