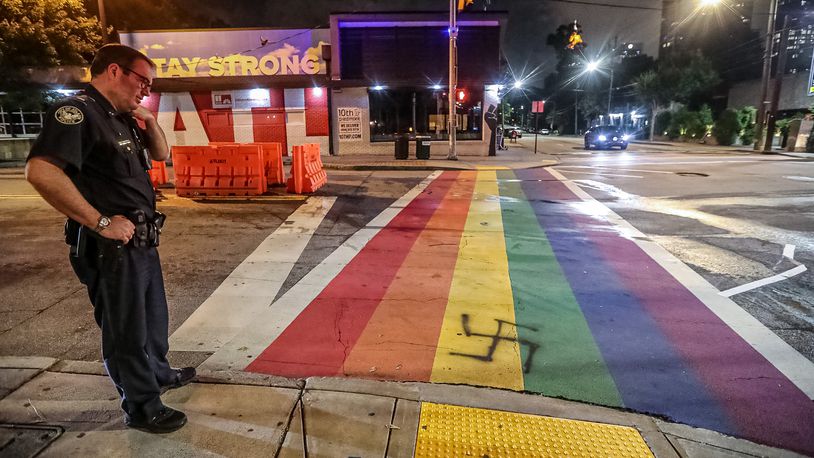 ATLANTA (AP) — Atlanta police say they have arrested a man they suspect spray-painted swastikas on a rainbow crosswalk meant to honor the city’s LGTBQ community, as well as at other sites.

Police tell local news outlets that they went to an apartment in Atlanta’s Midtown neighborhood around noon Friday seeking the man. A SWAT team was called after the man refused to come out. Around 5 p.m., the man, who has not been named, emerged and was arrested.

The first swastika was found Wednesday on the crosswalk. A second swastika, as well as an obscenity and an anti-gay slur, were found on the crosswalk in Midtown on Friday.

A swastika and other graffiti were also painted before dawn Friday on the nearby Federal Reserve Bank of Atlanta. Police said security cameras at both locations captured images of a man.

“This is an unacceptable act in this city, anywhere in this city or in any form where citizens are targeted by hate,” interim police chief Darin Schierbaum told The Atlanta Journal-Constitution. “This department is aggressively looking now for the individual who did this.”

Police said they believe the same man painted the swastika on Wednesday, releasing video of both incidents.

Schierbaum said the police department is investigating the acts as hate crimes.