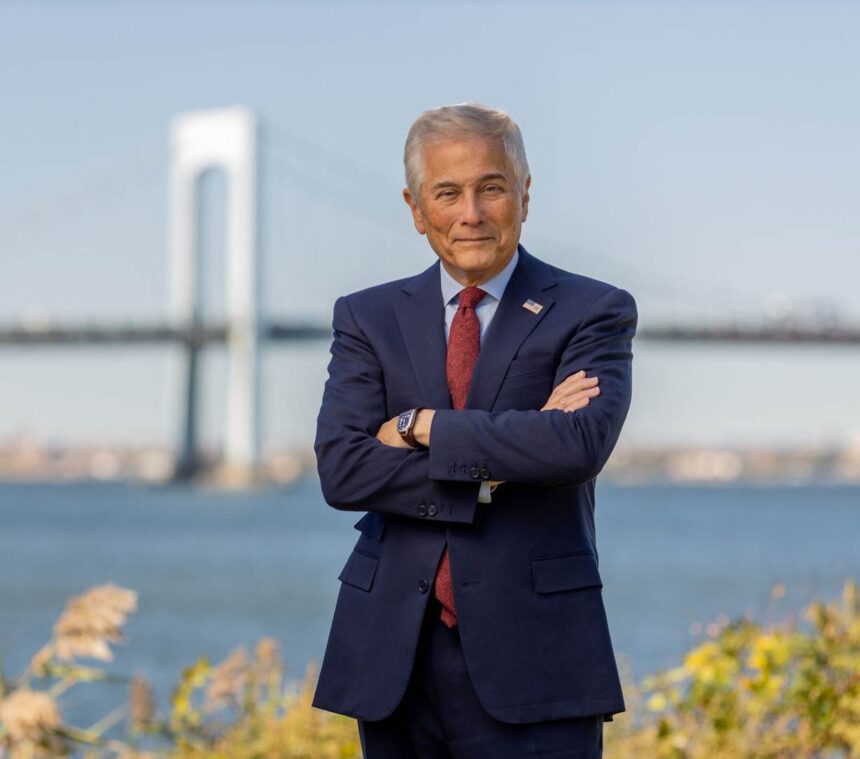 Robert Zimmerman, a Democratic candidate from New York running for the U.S. House of Representatives in the 2022 U.S. midterm elections, appears in an undated handout photo obtained by REUTERS on October 11, 2022. Robert Zimmerman/Handout via REUTERS
SHARE

NEW YORK (Thomson Reuters Foundation) – History is in the making. For the first time, two openly gay candidates are competing for election to a U.S. congressional seat.

Analysts say the race in New York’s 3rd congressional district highlights the huge strides LGBTQ+ representation and acceptance have made on the political stage.

“What’s notable is that it doesn’t seem like that big of a deal, which shows how far the country has come on acceptance of gay and lesbian candidates,” said Kyle Kondik, a political analyst at the University of Virginia Center for Politics.

Democrat Robert Zimmerman, a 68-year-old marketing executive, will face off against George Santos, a 34-year-old Republican financier, in the midterm elections on Nov. 8.

Zimmerman has a slight advantage in the “toss up” race, according to nonpartisan election forecaster The Cook Political Report, as the Democratic incumbent, Thomas Suozzi, stands down.

If he wins, Santos would be the first openly gay Republican to gain a seat in Congress. Two Republicans have been re-elected after either coming out or being outed as gay while in office.

Republicans, which analysts widely expect to make considerable gains in Tuesday’s elections, need a net gain of five seats to regain control of the House of Representatives, the U.S. Congress’s lower chamber.

“When it comes to (both candidates) being gay, that’s where the similarities end,” said Sean Meloy, vice-president of political programs at the LGBTQ Victory Fund, an organization that supports LGBTQ+ political candidates and has endorsed Zimmerman.

Zimmerman said his opponent has “stood with the most extremist elements of the Republican party” and would not protect LGBTQ+ rights if elected.

He pointed to Santos’ attendance at former President Donald Trump’s Jan. 6 rally last year that preceded the Capitol riot, and his 2020 pledge to vote for a national abortion ban.

He also cited Santos’ support for Florida’s law to limit discussion of LGBTQ+ issues in schools, which has been dubbed the “don’t say gay” law by opponents.

Santos, a first-generation American whose parents emigrated from Brazil, has sought to deflect the attacks by focusing on issues such as inflation, the economy and crime.

“The Florida legislation takes into consideration parental input and participation into the education of their kids,” Santos said in a phone interview. “I’m all for that.”

The upcoming midterms will feature a record number of LGBTQ+ candidates, though they are still underrepresented in official roles.

Almost 680 candidates are on the ballot for the November elections, 18% more than in 2020, according to a report from the LGBTQ Victory Fund.

Nine current members of the House and two of the Senate, Congress’s upper chamber, are openly gay, lesbian or bisexual. All of them are Democrats.

No out LGBTQ+ Republican has been in Congress since Arizona’s Representative Jim Kolbe stepped down in 2007.

Santos said his candidacy was evidence that the Republican party welcomes LGBTQ+ people.

“The reality is the Republican party is a big-tent party just like the Democrats claim to be,” he said.

Charles Moran, president of the Log Cabin Republicans organization, which represents the party’s LGBTQ+ members and allies, said it was a sign of progress that the historic race was taking place in a mostly suburban district.

“This isn’t a heavily urban district with a traditional LGBT core, like you’d find in San Francisco, Los Angeles, (or) Manhattan,” he said.