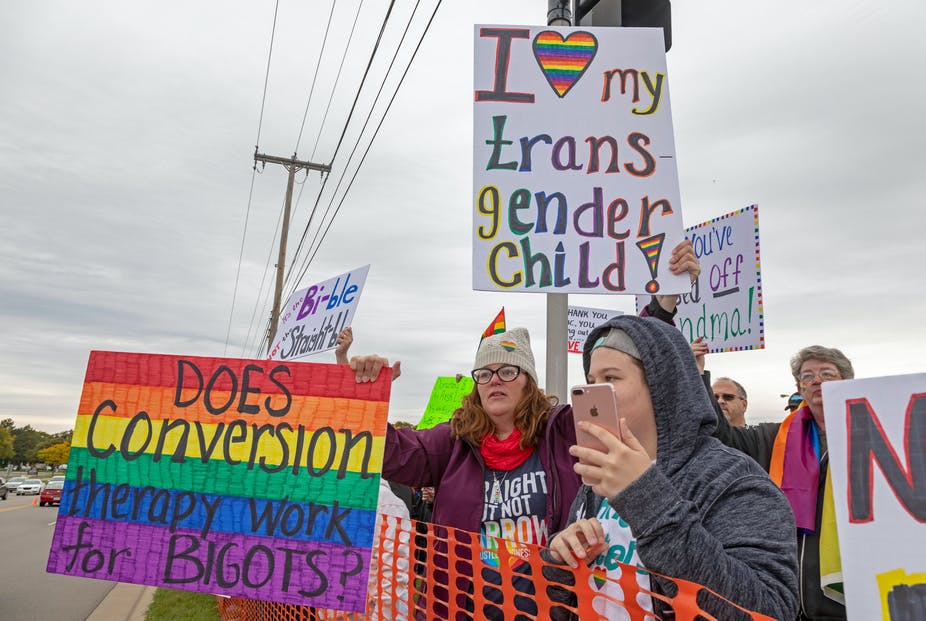 From injections to electric shocks, prayer to rape, myriad methods are peddled by medics, counsellors and moralists to suppress the sexual desire or gender identity of LGBT+ patients.

Interviews with practitioners and patients worldwide reveal a deep divergence over practices that dozens of medical associations have condemned as ineffective and harmful.

In post-Soviet Georgia, a teenage lesbian was injected with hormones as a “cure” initiated by her mother.

The prayers of a Mexican pastor persuaded a trans woman to cut off her own hair in a bid to obliterate her identity.

All are examples of modern conversion therapy, which thrives in the shadows even as moves to ban it gather pace globally.

“Wherever homophobia and transphobia exist, there will be a form of conversion therapy available as well,” said Randy Thomas, a former vice president at Exodus International, a U.S-based umbrella organisation of “ex-gay” Christian groups.

In 2013, Exodus was disbanded by its then-president, Alan Chambers, who apologised for promoting “sexual orientation change efforts” and for the “pain and the hurt” it caused.

Conversion therapy did not end with Exodus, though.

Its chief advocates are often religious or conservative groups. Many work in secret, but those who are open say it works, is safe and that adults should be free to undergo it.

“They need to want it, to have decided to do it, and to know they will have a hard time,” said Heba Kotb, an Egyptian doctor specialising in sexual medicine who treats gay men.

“The main line of treatment is to replace the programming of this person, who is leaning towards same-sex attraction. We remove this and replace it with heterosexual attraction.”

Bans on forms of conversion therapy have been proposed in at least 13 countries, according to research by the Thomson Reuters Foundation.

But with discrimination against LGBT+ people widespread, conversion therapy remains rife in every region of the world.

Its full extent is hard to gauge, but global studies indicate its existence in every region of the world.

Taha Metwally was 18 when he revealed his feelings for a friend; the friend suggested he see a doctor who could heal him.

“I just (went) because I loved him,” Metwally, now 28, said from Paris, where he moved from Egypt three years ago.

“She took something without speaking with me about my consent,” said Metwally, now an LGBT+ activist.

Metwally says it took him years to deal with the trauma, with numerous studies showing a correlation between conversion therapy and suicide attempts.

Mental health professional organisations in 22 countries have condemned conversion therapy as ineffective and harmful, according to a 2020 report by the advocacy group ILGA-World.

Conversion therapy was first used in the second half of the 19th century, said University of Illinois Chicago’s Timothy Murphy.

In 1892, a U.S. doctor prescribed “severe and fatiguing bike riding” to a man he diagnosed with “sexual abnormality”, Murphy said in a 1992 research paper.

‘The Origins of Organ Transplantation’ by Thomas Schlich, a medical historian at Canada’s McGill University, details how German and Austrian surgeons then tried testicular transplants.

Nazi doctors then experimented with castration as a gay “cure”, according to French historian Florence Tamagne.

Electroshock therapy was used on trans women and gay and bisexual men in the 1960s in Britain and by South Africa’s apartheid army, according to ILGA-World.

Doctors have reportedly used electroshock therapy on LGBT+ people in the past decade in China, Iran and India, according to OutRight Action International, another LGBT+ advocacy group.

Lesbians and bisexual women have also been raped by men who want to force them into heterosexuality, researchers say.

So-called “corrective rape” is “pervasive … in all regions of the world”, the United Nations’ independent expert on sexual orientation and gender identity said in a 2020 report.

“It is caused by ignorance, homophobia and our churches,” said Nomandla, a South African activist whose name has been changed for her protection.

Lesbians have similarly reported “corrective rape” and beatings in drug clinics in Ecuador, despite a 2012 ban.

Talking therapy is also used widely as a tool, though many counsellors deny their work amounts to conversion therapy.

“What people like myself offer is psychological therapy that is identical in method to therapy to help people with addictions or to affirm a sexual identity, it is just the aim that is different,” said Phelim McIntyre, a British-based counsellor.

Yet many conversion therapy bans specifically prohibit mental health or medical professionals from helping anyone to try to change their sexual orientation or gender identity.

The first ban on using counselling this way was in 1999 in Brazil. In 2012, California became the first U.S. state to ban medical and mental health professionals from carrying out conversion therapy on minors.

Now 20 U.S. states ban it, albeit with similar loopholes.

Bans are working their way through seven parliaments, including New Zealand, Canada and Spain. Dutch and Austrian lawmakers have voted for a bill to be introduced.

In Finland, a petition calling for a ban has more than 50,000 signatures so must now be considered by its parliament.

U.S. President Joe Biden said he would outlaw conversion therapy during his election campaign, echoing pledges made in Britain and Norway, all of which have yet to be implemented.