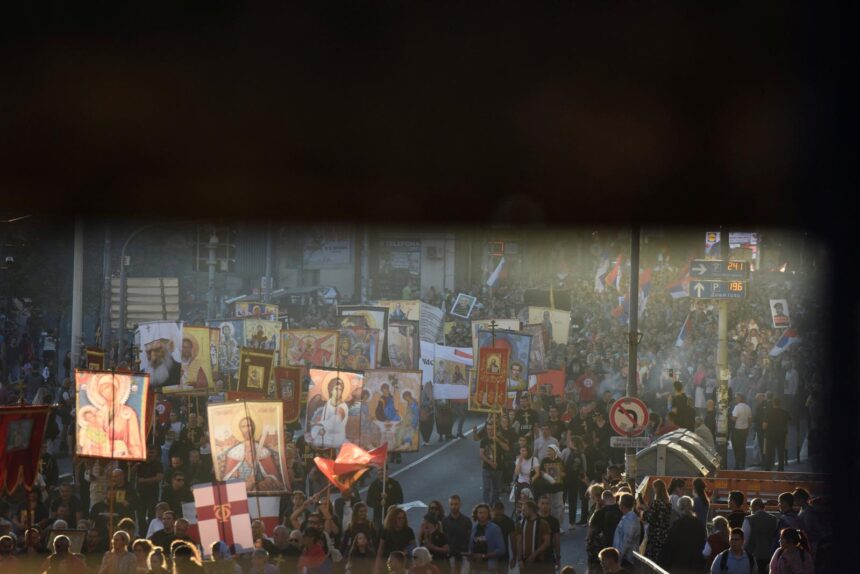 BELGRADE (Reuters) – Thousands of religious and right-wing activists marched through Serbia’s capital on Sunday calling for authorities to ban a Gay Pride march planned for next weekend.

A column of bikers who support the policies of Russian President Vladimir Putin and Russia’s invasion of Ukraine, revved their engines in support of the crowds who marched to Belgrade’s St Sava cathedral for prayers.

In a sermon, the head of the Serbian Orthodox Church, Patriarch Porfirije, said the EuroPride event threatened traditional family values.

“They want to desecrate the sanctity of marriage and the family and impose an unnatural union as a substitute for marriage,” he told the crowd.

Serbia’s president, Aleksandar Vucic, said on Saturday there had been threats against the march, and it was up to the police whether it should be stopped.

LGBT and rights groups have repeatedly said they will march next Saturday even if authorities call it off.

Gay sex is legal in Serbia, but same-sex marriages are not allowed and activists say LGBT people face hostility and discrimination.

Serbian governments have banned Pride parades in the past, and some events in the early 2000s were marred by violence.

Many in Sunday’s crowd waved Russian flags, a show of support for Moscow in a country where the government is trying to balance its ambition to join the European Union with its longstanding ties with Russia and China.

Brussels has said Serbia needs to make a string of reforms to become as EU member including improving the rule of law and its human and minority rights record.