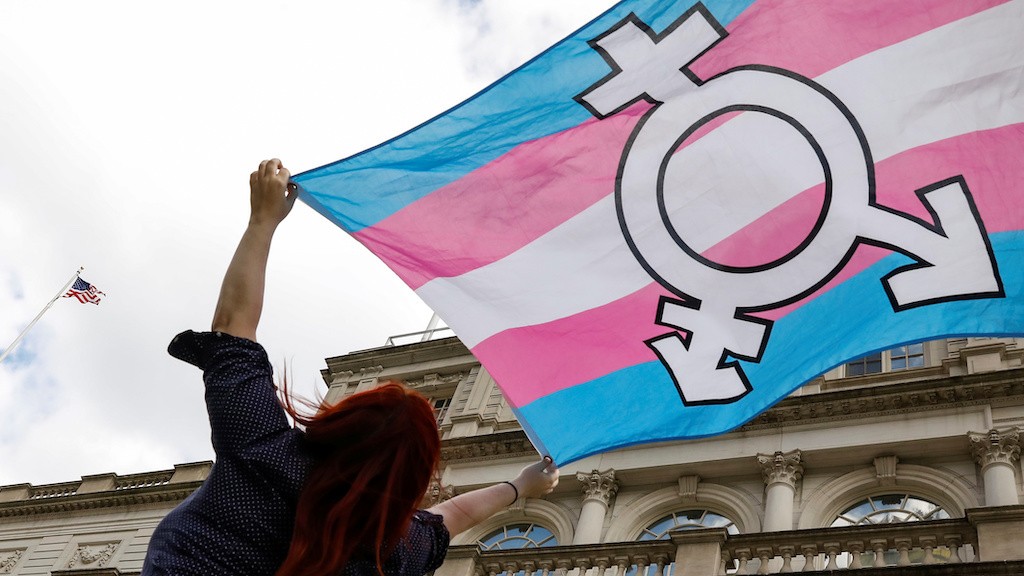 A person holds up a flag during rally to protest the Trump administration's reported transgender proposal to narrow the definition of gender to male or female at birth, at City Hall in New York City, U.S., October 24, 2018. REUTERS/Brendan McDermid
SHARE

WASHINGTON, June 28 (Reuters) – The U.S. Supreme Court on Monday handed a victory to a transgender former public high school student who waged a six-year legal battle against a Virginia county school board that had barred him from using the bathroom corresponding with his gender identity.

The justices left in place a lower court’s ruling that the Gloucester County School Board had acted unlawfully in preventing Gavin Grimm from using the boys’ bathroom before he graduated in 2017. In doing so, the court opted against taking up a major transgender rights case that could have set a nationwide precedent on the issue.

The court turned away the board’s appeal of a 2020 ruling by the Richmond-based 4th U.S. Circuit Court of Appeals that Grimm is protected under the federal law known as Title IX that bars sex discrimination in education and the U.S. Constitution’s requirement that people be treated equally under the law.

The brief court order noted that conservative Justices Clarence Thomas and Samuel Alito would have taken up the case.

Grimm sued the school board in 2015. The Supreme Court previously took up the case in 2016 but did not issue a ruling and sent it back to lower courts.

The 4th Circuit ruling does not set a national legal precedent, but it does apply to the five states within its jurisdiction: Maryland, North Carolina, South Carolina, Virginia and West Virginia.

Bathroom access represents one of the major issues in the fight over transgender rights, and Grimm’s suit was the most prominent legal case on the subject. But the legal and political battles over protections for transgender Americans, both in education and in society as a whole, are set to continue.

Several states including Florida have enacted laws that block transgender women and girls from competing in sports. The Supreme Court may yet rule on the bathroom access issue and related transgender rights matters in future cases.

“Our work is not yet done,” said Josh Block, an American Civil Liberties Union lawyer who represents Grimm.

Block said the decision by the justices not to hear the case indicates that they see no urgency to weigh in on the issue.

“The court can see that trans kids have been using the restrooms and none of the apocalyptic fears have actually come to pass,” Block added.

The school board did not immediately respond to a request for comment.

President Joe Biden’s administration, reversing the position taken under his predecessor Donald Trump, said on June 16 that Title IX protects both gender identity and sexual orientation. The administration has not said specifically how that applies to school bathroom access.

Grimm, assigned female gender at birth, identifies as male. Grimm initially enrolled at Gloucester High School as a girl and started attending as a male student in September 2014. With the school’s permission, Grimm used the boys’ bathroom for about seven weeks without incident.

After complaints from parents, the school board adopted a policy in December 2014 requiring students to use the bathroom corresponding with their gender at birth. Grimm was given the option of using a separate gender-neutral bathroom, but refused, feeling stigmatized.

Judge Henry Floyd, writing for the 4th Circuit, said the school board’s actions constituted “a special kind of discrimination against a child that he will no doubt carry with him for life.” The 4th Circuit upheld a federal judge’s 2019 ruling in Grimm’s favor.

Grimm’s case was previously set to be argued at the Supreme Court in 2017 but was taken off the schedule after Trump’s administration rescinded guidance issued under his predecessor Barack Obama regarding bathroom access for transgender students.

The Supreme Court issued a landmark 2020 ruling that gay and transgender people are protected under a federal law that bars sex discrimination in employment. That ruling helped guide the 4th Circuit’s decision in Grimm’s case and the Biden administration’s position on Title IX protections.