As the nation continues to grapple with issues of racial and social justice, it is important to acknowledge and condemn acts of hate and discrimination wherever they occur. Recently, in Tennessee, a group of far-right radicals and white supremacists gathered across from an 18-and-over drag brunch, brandishing a Nazi flag and accusing patrons of being “groomers.”

According to Nashville’s public radio station WPLN, the group, which included members of the Patriot Front, stood across the street from Hix Farm Brewery, wearing white masks and chanting homophobic slurs. The group, whose numbers were small, also held signs with hateful and misleading messages, such as “Why do they want an audience of children?”

It is worth noting that the event was for adults only, and a person associated with Upper Cumberland Pride, the group that hosted the brunch, stated in a video posted on Facebook that there were no children present at the event. The video also showed that the event was well-attended and that those present were able to enjoy themselves despite the hateful demonstration happening outside.

The Patriot Front is a known hate group that has shown up at events across the country to intimidate and threaten LGBTQ+ communities. The group goes to great lengths to conceal the identities of its members, but their hateful rhetoric and symbols are clear.

It is important to recognize that acts of hate and discrimination, no matter how small, have a detrimental effect on marginalized communities. The LGBTQ+ community, in particular, has long been targeted by white supremacists and other hate groups. As a society, we must stand in solidarity with these communities and actively work to dismantle systems of oppression.

Additionally, it is important for businesses and other public spaces to take a stand against hate and discrimination. The donut shop located across from the drag brunch, Ralph’s, was criticized for allowing the homophobic mob to assemble in front of its establishment. Ralph’s made a statement on Instagram distancing itself from the protest and stating that the sidewalk outside their building is public property and they could not remove the protesters. However, they should have condemned the protest and made it clear that hate and discrimination are not welcome in their establishment. 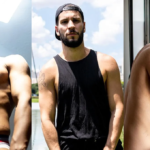