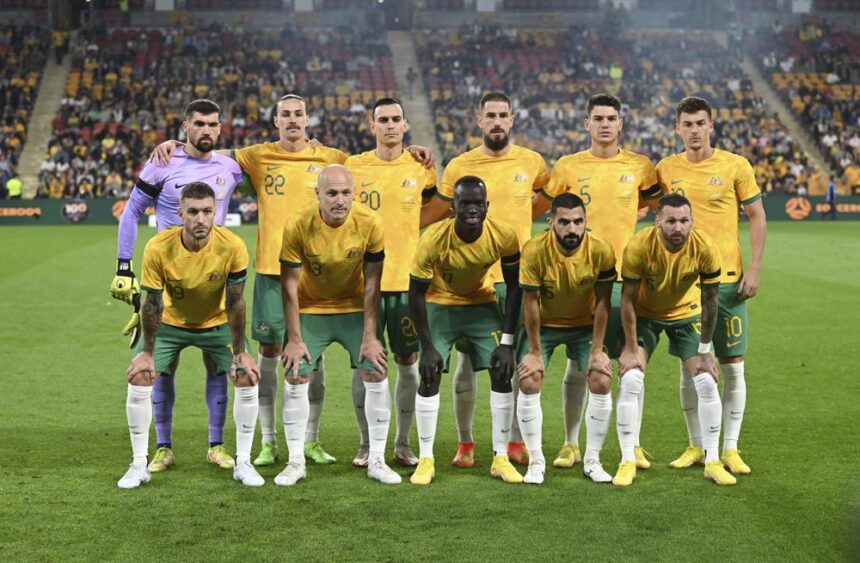 The Australian national soccer team, the Socceroos, pose for a photo before the start of a friendly soccer international between Australia and New Zealand in Brisbane, Australia, Thursday, Sept. 22, 2022. (AP Photo/Dan Peled)
SHARE

BRISBANE, Australia (AP) — The Australian men’s soccer team has issued a three-minute video highlighting Qatar’s human rights record, including its treatment of foreign workers and restrictions on the LGBTQI+ community, and demanding genuine reform as a legacy of the Gulf country’s staging of the World Cup.

In the video, 16 players read a sentence or two each from a statement. Football Australia also released a separate statement which said: “The tournament has been associated with suffering for some migrant workers and their families and this cannot be ignored.”

The gas-rich emirate has been fiercely criticized in the past decade for its treatment of migrant workers, mostly from south Asia, who were needed to build tens of billions of dollars’ worth of stadiums, metro lines, roads and hotels.

The Socceroos are one of 32 teams competing at the Nov. 20-Dec. 18 World Cup and have added their voices to a growing list of players from competing nations highlighting the issues.

“Addressing these issues is not easy. And we do not have all the answers,” the Australian players said in the video released Thursday. “We stand with FIFPro, the Building and Wood Workers International, and the International Trade Union Confederation, seeking to embed reforms and establish a lasting legacy in Qatar. This must include establishing a migrant resource center, effective remedy for those who have been denied their rights, and the decriminalization of all same-sex relationships.

“These are the basic rights that should be afforded to all and will ensure continued progress in Qatar . . . (and) a legacy that goes well beyond the final whistle of the 2022 FIFA World Cup.”

Goalkeeper Mat Ryan says in the video: “There are universal values that should define football — values such as respect, dignity, trust and courage. When we represent our nation, we aspire to embody these values,”

“As PFA members, we understand the power of collective bargaining and the fundamental rights of all workers to form and join a union,” Danny Vukovic adds.

Football Australia said the video follows almost two years of consultations between the Socceroos, the players’ union, and Football Australia with a number of global organizations including Amnesty International, the sport’s world governing body and FIFPRO, the global players organization.

Qatar’s ruling emir this week lashed out at criticism of his country over its preparations to host soccer’s marquee tournament, describing it as an “unprecedented campaign” targeting the first Arab nation to hold the tournament.

Qatar has repeatedly pushed back, insisting the country has improved protections for migrant workers and claiming the criticism is outdated.

In a televised speech Tuesday, Sheikh Tamim bin Hamad Al Thani said Qatar “has been subjected to an unprecedented campaign that no host country has ever faced.”

“The campaign tends to continue and expand to include fabrications and double standards that were so ferocious that it has unfortunately prompted many people to question the real reasons and motives,” he said.

Last month, eight of the 13 European teams which qualified for the tournament said their captains will wear an armband with a heart-shaped, multi-colored design at games to support the “One Love” campaign against discrimination.