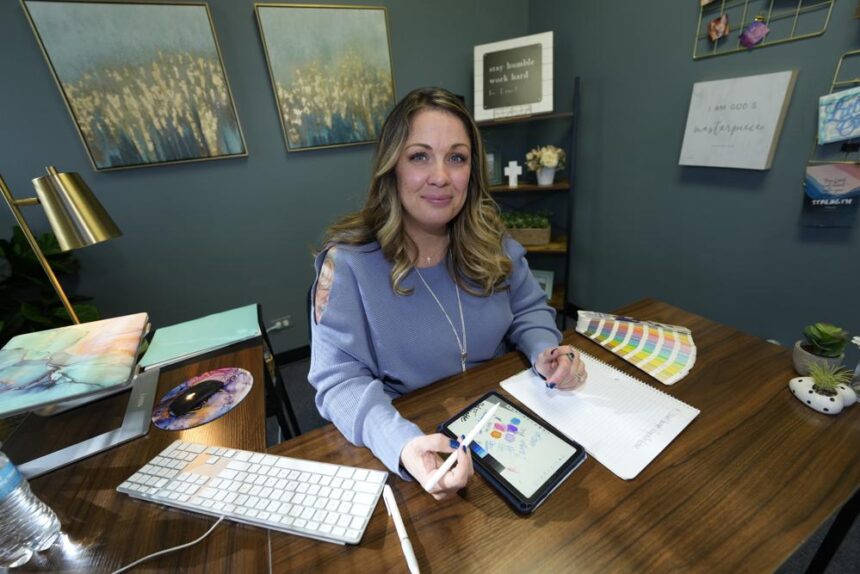 LITTLETON, Colo. (AP) — A Christian web designer who contends her religious beliefs prevent her from making wedding websites for gay couples said Monday that her legal battle in the U.S. Supreme Court next month is about protecting everyone’s right to free speech.

Lorie Smith spoke about her case, which is the latest clash over religion and LGBTQ rights to reach the nation’s highest court, while sitting in the office she uses for her design company in the Denver suburb of Littleton. The room was adorned with two crosses and a wooden plaque inscribed with a line from Ephesians: “I am God’s masterpiece.”

Smith claims Colorado’s anti-discrimination law violates her right to free speech over same-sex marriages, which she maintains are antithetical to her Christian values. Though Smith hasn’t yet expanded to her services to include wedding websites with her company, 303 Creative, she said she’s dreamed about doing so since she was a child.

“Colorado is censoring and compelling my speech,” said Smith, who identifies as evangelical non-denominational. “Forcing me to communicate, celebrate and create for messages that go against my deeply held beliefs.”

Her argument is debatable.

David Cole, national legal director for the ACLU, which opposes Smith’s suit, contends that the state’s anti-discrimination law merely requires businesses offer their services to everyone and does not curtail speech. Smith would be within her right to include a statement on her websites saying that she disagrees with same sex marriage, Cole said, but she cannot refuse to serve customers based on their sexual orientation.

To Cole, a ruling in Smith’s favor would be opening Pandora’s box.

“If 303 Creative prevails here, then any business that can be characterized as expressive, and that’s a lot of businesses, can start putting up signs saying no Jews served, no Christians served, no Blacks served,” Cole said. “We had that practice during Jim Crow, I don’t think we want that practice back again.”

Smith’s case, which is scheduled to be heard on Dec. 5, comes before a U.S. Supreme Court that now has a majority of conservative judges. The court has recently overturned women’s constitutional right to an abortion and set a new precedent for gun control regulations in a case in New York.

Colorado will face off in the U.S. Supreme Court against a Christian web designer who does not want to create custom wedding websites for same-sex couples and claims that the state’s anti-discrimination law violates her right to free speech. (Nov. 8)

Cole argues the designer still faces an uphill battle because the court has disagreed with similar arguments in the past.

“If the court rules for Lorie Smith it would have to reverse a long line of precedents and break from an unbroken set of cases,” Cole said.

Smith, who says she’s served LGBTQ clients, claims the lawsuit is not about gay marriage or the customer, only the freedom from being coerced into expressing ideas contrary to her beliefs. She believes a ruling in her favor would protect everyone’s free speech.

The impetus to file her lawsuit challenging Colorado’s law, Smith said, was not just about her own business but also what she said was the way the state pushed others of her faith to act against their beliefs, such as cake baker Jack Phillips.

Phillips, who had refused to bake a wedding cake for a gay couple in 2012, also faced off in the high court against Colorado. A 2018 U.S. Supreme Court decision gave Phillips a partial victory, saying that the Colorado Civil Rights Commission had acted with anti-religious bias against Phillips. But it did not rule on the larger issue of whether a business can invoke religious objections to refuse service to LGBTQ people.

“I don’t think I really have another choice than to stand up not only for my right but the rights of others,” said Smith. “That includes myself as an artist and it also includes the LGBT web designer who should not be forced to create and design messages that oppose same sex marriage.”

5 hours ago
Ukraine war brings a push for LGBTQ+ rights, but will it last? https://t.co/HWix3cyD33 #gay #gaynews #lgbt… https://t.co/FXbsI4gxb9