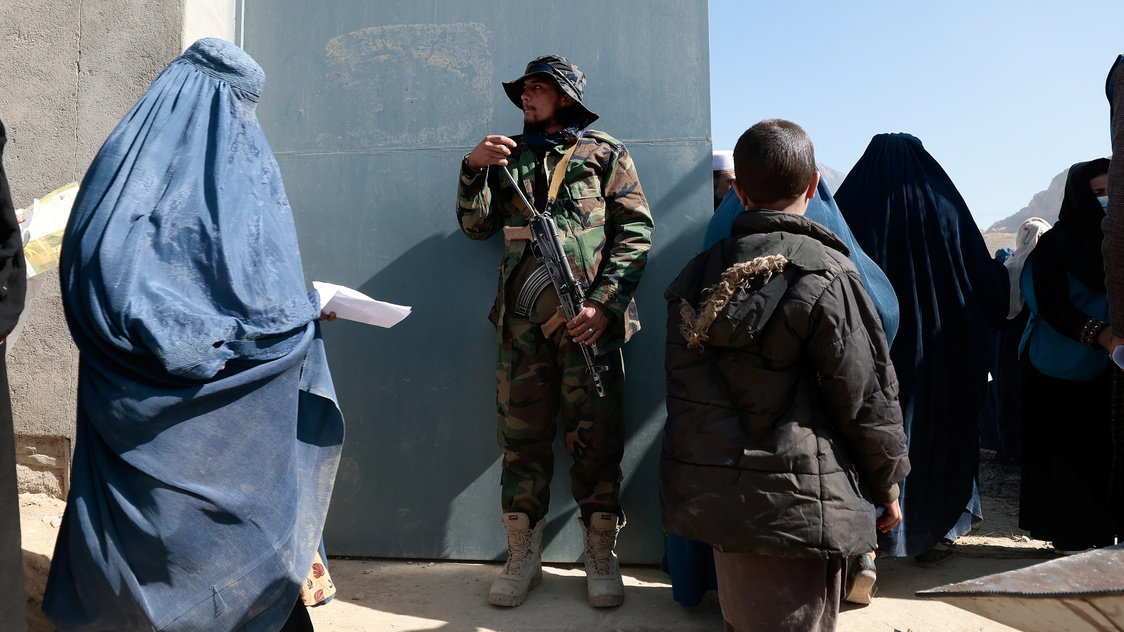 A Taliban fighter stands on guard as displaced Afghan women walk into an UNHCR distribution center to receive aid supply on the outskirts of Kabul, Afghanistan October 28, 2021. REUTERS/Zohra Bensemra
SHARE

LONDON (Thomson Reuters Foundation) – A group of LGBT+ Afghans has arrived in Britain for the first time since the Taliban’s return to power in August caused panic among gay and transgender Afghans, who feared persecution and even death under the Islamists’ rule.

The evacuation of the 29 Afghans is “hoped to be the first of many” in the coming months, Britain’s foreign ministry said in a statement on Saturday, hours after a Taliban spokesman told Reuters LGBT+ rights would not be respected.

Thousands of Afghans including LGBT+ people, women and officials linked to the previous administration rushed to flee the country after the Taliban’s swift return to power on Aug. 15, but many were unable to board foreign evacuation flights.

“We played a key role getting these people out and will continue to do all we can to help at-risk Afghans leave the country,” British Foreign Secretary Liz Truss said in a statement.

Members of the group will stay in “bridging accommodation”, a foreign ministry spokesperson said, declining to give details about their legal status or how they were able to leave Afghanistan, citing the need to safeguard the route.

During the Taliban’s 1996-2001 rule, there were reports of gay men being stoned to death in official executions.

Safe houses are being established for the Afghans, who arrived on Friday, said Sebastian Rocca, chief executive of Micro Rainbow, a charity supporting LGBT+ refugees.

He said the organisation would also help them access counselling, healthcare and jobs, with a dedicated helpline and a support worker who speaks Pashto and understands Dari.

“Of course, they are in a new country, in a place they’ve never seen before. Some of them don’t speak the language and they don’t know the system,” Rocca said.

Stonewall, Britain’s biggest LGBT+ rights group, and Canadian organisation Rainbow Railroad were also part of the effort to get the group to Britain, the foreign ministry said.

The operation should serve as a model for further emergency relocations of LGBT+ Afghans around the world, Stonewall Chief Executive Nancy Kelley told the Thomson Reuters Foundation.

“The situation is likely to remain extremely dangerous for some time,” she said.

“But it’s really important to acknowledge that this will not be a solution for the majority of LGBTQ+ Afghans and so we really have to think long term,” she added.

Rainbow Railroad Executive Director Kimahli Powell said the mission was “just the beginning of our efforts to help hundreds of LGBTQI+ individuals we are supporting in Afghanistan relocate to safety”.