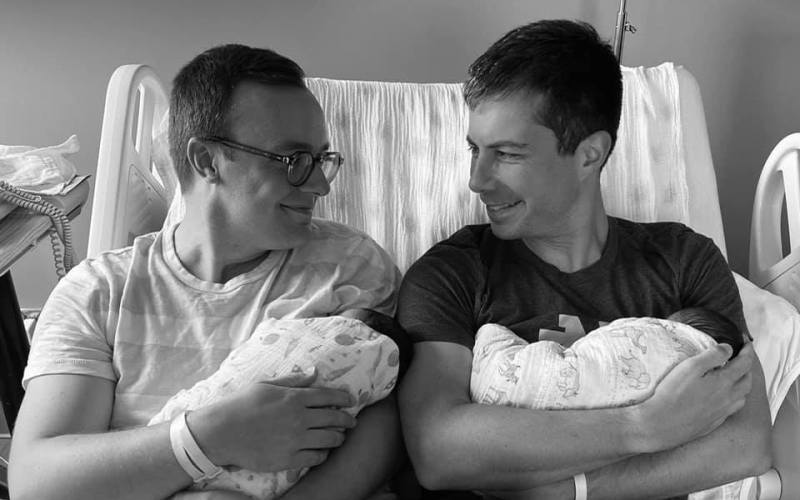 (Reuters) – U.S. Transportation Secretary Pete Buttigieg posted a picture of himself with his husband, Chasten, and their two babies on Saturday, after saying last month that the couple had become parents.

“Chasten and I are beyond thankful for all the kind wishes since first sharing the news that we’re becoming parents. We are delighted to welcome Penelope Rose and Joseph August Buttigieg to our family,” Buttigieg said on his personal Twitter account.

The tweet was accompanied by a photo of Buttigieg and Chasten holding two swaddled infants, but it gave no other details. A spokesperson for Buttigieg did not respond immediately to a request for comment.

Chasten, a teacher and author who routinely accompanied Buttigieg on the campaign trail, told media in July that the two had been trying to adopt for some time.

Buttigieg won a landslide re-election as mayor in South Bend, Indiana, in 2015, months after coming out as gay, and he has often voiced his confidence that the fact that he and Chasten married in 2018 would not hurt his political career.

A veteran of the war in Afghanistan who still answers to the title ‘Mayor Pete,’ Buttigieg quickly became a rising star in the Democratic Party. As his presidential bid faltered in early 2020, his endorsement of Joe Biden helped the future president secure the party’s nomination.

When he was overwhelmingly confirmed by the Senate as Biden’s transportation secretary, supporters credited Buttigieg with shattering a centuries-old political barrier for LGBTQ Americans.