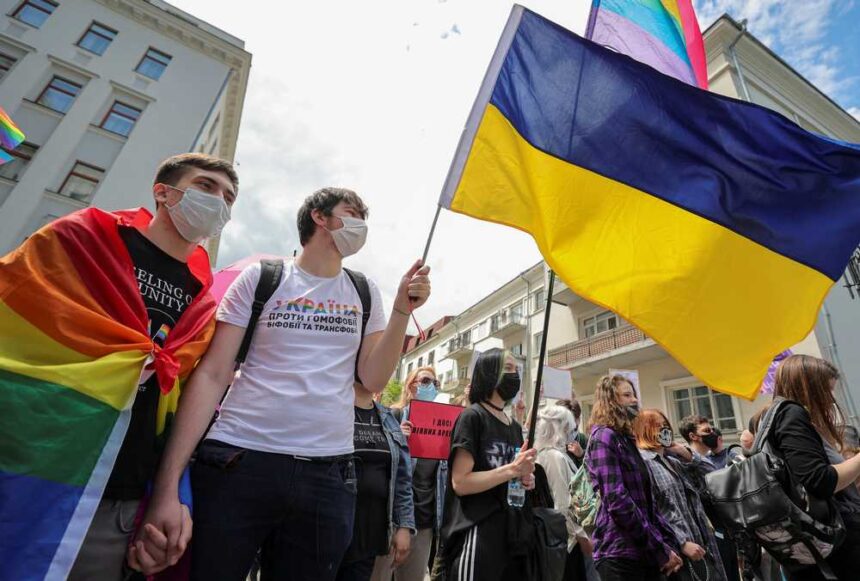 KYIV, Aug 25 (Thomson Reuters Foundation) – When openly gay soldier Alex Fischuk prepared to defend Ukraine against Russia’s forces in February, he feared not only for his own life but also that of his partner, who was also in the army.

As an LGBTQ+ couple in a nation where same-sex relationships are not recognised, the 23-year-old worried about what would happen if his boyfriend was injured or killed in combat.

“If our (partner) dies … we won’t be allowed even to bury (them) … they might not let us into the hospital,” said Fischuk, a cadet specialising in air reconnaissance.

So when separate Russian airstrikes hit their respective units in early March, killing a number of soldiers, Fischuk decided it was time to take their relationship forward.

“It was very scary. After that, I thought about it and decided I needed to propose,” he told the Thomson Reuters Foundation, adding that the couple had got engaged in mid-March.

LGBTQ+ campaigners say that several same-sex soldier couples have got engaged since Russia’s invasion, with many hopeful that Ukraine will legalise gay marriage, or civil unions at least.

While Ukraine’s LGBTQ+ community has few legal protections and faces entrenched discrimination in the mainly Orthodox Christian nation, a recent petition demanding the legalisation of same-sex marriage has buoyed hopes for greater equality.

Responding to the petition earlier this month, Ukrainian President Volodymyr Zelenskiy said it would not be possible during wartime – as the constitution would have to be changed.

However, he said he had asked Prime Minister Denys Shmyhal to “address the (petition’s) issue” and noted that the government had already been looking into civil partnerships as an option.

Activists believe the war has bolstered public support in Ukraine for LGBTQ+ people, many of whom have joined the armed forces and taken on volunteer roles to help in the conflict.

Russia’s war has put Ukraine’s LGBTQ+ community on high alert. Moscow has increasingly cracked down on gay, bisexual and transgender people since passing a “gay propaganda” law in 2013, and reports of hate crimes and abuse have risen since then.

HOPES OF WEDDING AT HOME

Ukraine decriminalised same-sex relations in 1991 along with many other countries in the former Soviet Union, but LGBTQ+ people still lack many legal rights and prejudice lingers.

The nation ranks 39th in Europe on LGBTQ+ equality, rights group ILGA-Europe says. While discrimination in the workplace was banned in 2015, same-sex couples cannot marry or adopt.

They also do not have a right to inheritance, hospital visitations or to make medical decisions for an ill partner, said Vitalia Lebid, a lawyer at the Ukrainian Helsinki Human Rights Union.

Pavlo Lagoyda, an anti-aircraft gunner in the Ukrainian military, said he feared he would not be able to transfer his property to his male partner if he died.

The couple got engaged two years ago and had planned to go abroad to wed, but Lagoyda now hopes that opportunity will also open up to them at home, and ultimately boost social acceptance.

“If (same-sex marriage) is legalised and we’re allowed to live in peace, there will be less hate,” he said.

The 20-year-old said he experienced homophobia both in civilian life and in the military, and had recently been beaten by a fellow soldier after he learned that Lagoyda was gay.

However, Lagoyda said he had good relationships with his military colleagues on the whole, and was widely accepted.

The petition demanding the legalisation of same-sex marriage has amassed more than 28,000 signatures to-date, which LGBTQ+ activists said was a huge improvement on other efforts in recent years that had only gained the support of a few hundred people.

‘Nash Svit’ – a LGBTQ+ rights centre – said Ukrainian public opposition against same-sex civil unions had dropped to 41.9% in 2022 from 69% in 2016, based on two polls conducted for the organisation by the Kyiv International Institute of Sociology.

While Zelenskiy’s response to the petition was widely hailed as a positive signal, LGBTQ+ campaigner Olena Shevchenko said the government had been talking about same-sex civil partnership laws for years, but that this had never progressed to a vote.

“It’s not even clear when this will happen,” said Shevchenko, head of the LGBTQ+ rights organisation Insight.

“People need this now,” she said, adding that marriage equality was necessary given that civil partnerships do not grant couples full legal rights when it comes to children.

In a statement, Ukraine’s Secretariat of the Cabinet of Ministers said Shmyhal – the prime minister – had instructed the ministries for social policy, justice and foreign affairs to consider the issues raised in the petition by Aug. 26.

“In particular, we are talking about options for decisions regarding the legalisation of civil partnerships registered in Ukraine as part of the work on establishing and ensuring human rights and freedoms,” the statement said.

The war, which recently passed the six-month mark, has united the nation and inspired Ukrainians to look past their prejudices when it comes to LGBTQ+ people, according to Jul Sirous, a coordinator for volunteers and teamwork at KyivPride.

“(People are) now looking at some things in a completely different light because compared to the fact that a person might be gone tomorrow, the fact that they are gay or a lesbian – we’re not paying attention to that,” Sirous said.

“This war has helped in this way.”