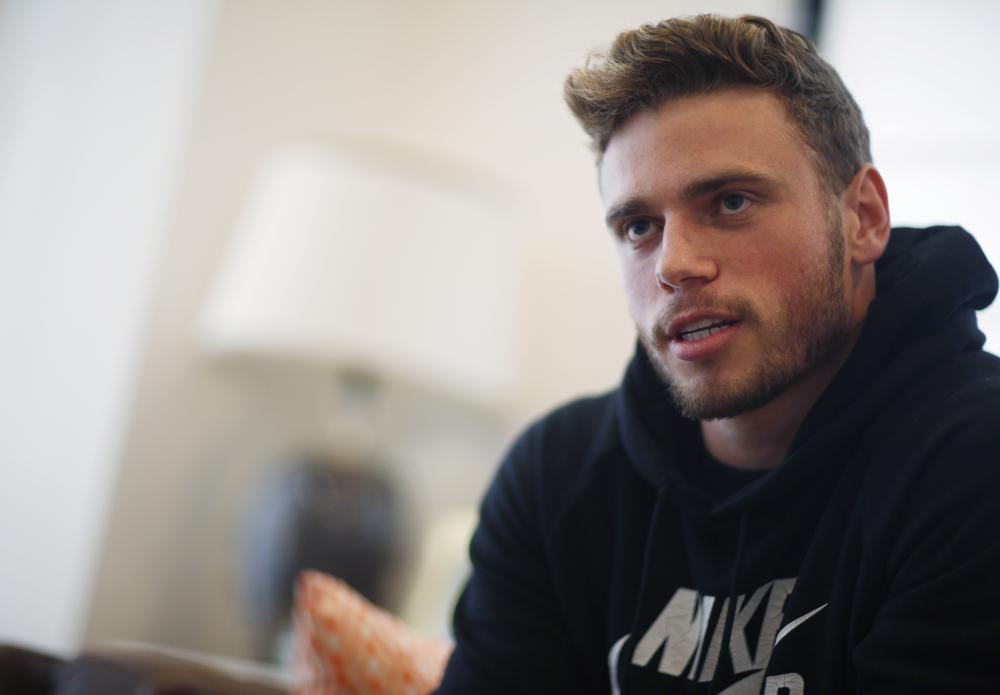 ZHANGJIAKOU, China (AP) — When three-time Olympian Gus Kenworthy took the remarkable, perhaps even brave decision to speak out against “human rights atrocities” while still in China at the Winter Games, the self-proclaimed “loud and obnoxious” British skier also proved that other athletes, had they chosen, perhaps could have used their Olympic platform to pipe up, too.

Because Kenworthy wasn’t hauled away and imprisoned, as Chinese critics of the ruling Communist Party routinely are. Doing so would have generated exactly the sort of global focus on the Chinese government’s authoritarian methods that it sought to avoid while global sports’ biggest show was in town.

And with the notable exception of Kenworthy, China largely accomplished that mission.

Olympians with any qualms about chasing medals in a country accused of genocide against its Muslim Uyghur population and of other abuses kept their views on those topics to themselves for the durations of their stay. And perhaps for good reason: They faced vague but, as it turned out, undeployed Chinese threats of punishment, constant surveillance and the sobering example of tennis star Peng Shuai’s difficulties after she voiced allegations of forced sex against a Communist Party official.

“We have seen an effective silencing of 2,800 athletes, and that’s scary,” said Noah Hoffman, a former U.S. Olympic skier and board member of the Global Athlete advocacy group pushing for Olympic reform.

Kenworthy, speaking to The Associated Press before his 8th-place finish in the halfpipe final on the Games’ penultimate day, laid out why.

“I’ve also been advised to sort of tread lightly while I am here and that’s what I am trying to do.”

Immediately after competing, however, the proudly gay athlete’s gloves came off.

He prefaced criticism with praise for China’s “incredible job with this Olympics” and carefully calibrated his words. But unlike other Olympians, he couldn’t bite his tongue until he got home. Kenworthy aimed jabs not only at the host country’s rights abuses and “poor stance on LGBTQ rights” but also at other athletes he said try “to appeal to the masses” and avoid ruffling feathers.

“I’ve already kind of accepted that that’s not what I’m gonna do,” he said. “I’m just gonna speak my truth.”

In fairness, Olympians found themselves squeezed on all sides in Beijing. Campaigners abroad hoped they would spark global outrage over the imprisonment in re-education camps of an estimated 1 million people or more, most of them Uyghurs. China, backed to the hilt by the International Olympic Committee, didn’t want critical voices to be heard. And their own voices told athletes to focus, focus, focus on the pursuit of Olympic success that they, their coaches and families sacrificed for.

The sweep and vagueness of a Chinese official’s threat before the Games of “certain punishment” for “any behavior or speech that is against the Olympic spirit” appeared to have a particularly sobering effect on Beijing-bound teams. Campaigners who met with athletes in the United States in the weeks before their departure, lobbying them about Uyghurs and the crushing of dissent in Tibet and Hong Kong, noticed the chill.

“Prior to the statement, we had been engaging with quite a few athletes,” said Pema Doma, campaigns director at Students for a Free Tibet. They “were expressing a lot of interest in learning more and being engaged in the human rights issue.”

Afterward, “there was a very, very distinct difference” and “one athlete even said to an activist directly: ‘I’ve been instructed not to take anything from you or speak to you,’” she said in a phone interview.

Other concerns also weighed on Olympians, way beyond the usual anxieties that often come with travel to a foreign land, away from home comforts.

Warnings of possible cyber-snooping by Chinese security services and team advisories that athletes leave electronic devices at home were alarming for a generation weaned on social media and constant connectivity with their worlds.

Also wearing were daily coronavirus tests that were mandatory — and invasive, taken with swabs to the back of the throat — for all Olympians, locked inside a tightly policed bubble of health restrictions to prevent infection spreads. The penalty for testing positive was possible quarantine and missed competition, a terrible blow for winter athletes who often toil outside of the limelight, except every four years at the Games.

“Who knows where those tests go, who handles the results,” Kenworthy said. “It’s definitely in the back of the mind.”

“And there’s like all the cybersecurity stuff. It is concerning,” he told The AP.

Often, athletes simply blanked when asked about human rights, saying they weren’t qualified to speak on the issue or were focused on competition, and hunkered down.

On Twitter, Dutch speedskater Sanne in ’t Hof blocked, unblocked and then blocked again a Uyghur living in the Netherlands who posted critical comments of Olympians in what he called “genocide” Games. Mirehmet Ablet shared a screengrab with The AP showing that the skater had barred him from accessing her account, where she tweeted that she “enjoyed every second!′ of her first Olympics. Ablet’s brother was arrested in 2017 in the Uyghur homeland of Xinjiang in far western China, and Ablet doesn’t know where he’s now held.

Hoffman, who competed for the U.S. at the 2014 and 2018 Games, said internal politics within teams may also have dissuaded athletes from speaking critically. Coaches can bench athletes who bring unwanted attention and “there’s pressure from your teammates to not cause a distraction,” he said in a phone interview. Athletes with self-confidence dented by sub-par performances may also have felt that they’d lost any platform.

He expects some athletes won’t be critical once home, so as to not disrespect the cheerful and helpful Games workers.

But he’s hopeful others will speak up on their return and that “we do get a chorus.”

Feeling unmuzzled, some already are.

Back in Sweden with his two gold medals in speedskating, Nils van der Poel told the Aftonbladet newspaper that although he had “a very nice experience behind the scenes,” hosting the Games in China was “terrible.” He drew parallels with the 1936 Summer Olympics in Nazi Germany and Russia hosting the Sochi Olympics before seizing control of the Crimean peninsula in 2014.

“It is extremely irresponsible,” van der Poel said, ”to give it to a country that violates human rights as clearly as the Chinese regime does.”