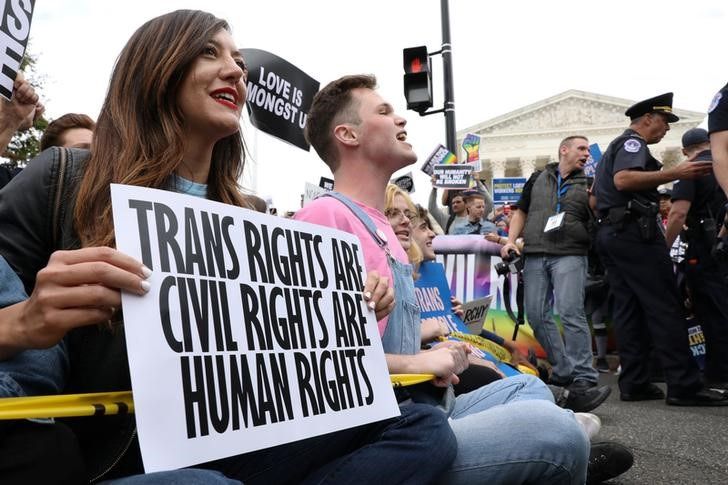 WASHINGTON (Reuters) – U.S. Republicans in Congress are lining up behind legislation that critics say would roll back protections for transgender people, setting a playbook for action on a divisive social issue should they take control of Congress this fall.

The bills have no chance of becoming law this year, as Democrats narrowly control both chambers of Congress. But they are a sign that Republicans aim to elevate a battle over transgender rights that has so far largely played out at the state level.

Republicans in the House of Representatives have introduced a bill that would block federal funding to colleges where transgender women are allowed to participate in sports with cisgender women. A separate bill would allow transgender people to sue medical personnel who helped them transition as minors.

Another bill would block funding to schools that disobey state laws regarding “materials harmful to minors,” mimicking state laws that have been used to remove books discussing history around race and LGBT themes.

The bills have support from key Republicans in the House and Senate. Republican House Minority Leader Kevin McCarthy has promoted the sports bill at a press conference and in a conservative newspaper. It is backed by 127 of 211 House Republicans.

In the Senate, five Republicans have sponsored a version of the bill targeting medical providers, including Senators Ted Cruz, Josh Hawley and Marco Rubio.

Republicans would be in a position to advance those bills next year if they win control of the House or the Senate in the Nov. 8 midterm elections, which analysts say is likely.

“I hope these are legislative initiatives that we can pass when we get the majority back,” said Representative Jim Banks, who sponsored the medical providers bill and represents a district in Indiana, which banned transgender students from playing on girls’ sports teams at schools this May.

Critics say the legislation proposed by House Republicans would reduce access to care needed by transgender people to transition. Transgender people are significantly more likely to attempt or commit suicide, often due to lack of access to gender-affirming medical care, according to the Human Rights Campaign, an LGBT advocacy group.

Banks called such criticism “outrageous” and said he did not see how his legislation would contribute to an unsafe environment for transgender people.

Violence against LGBT people has also increased fourfold between 2020 and 2021 in the United States, according to ACLED, a nonpartisan organization that tracks violence globally. The increase occurred during a three-year uptick in anti-LGBT bills introduced in state legislatures, according to the Human Rights Campaign.

“There has always been fringe voices who oppose LGBTQ equality, but now, unfortunately, that fringe has grown loud and is being given national platforms,” said Sarah Kate Ellis, president of GLAAD, a LGBT advocacy group.

Eighteen Republican-led states have enacted bans on trans girls and women participating in publicly funded women’s sports, while more than a dozen have introduced legislation mimicking Florida’s law limiting classroom instruction on sexual orientation and gender, according to the Human Rights Campaign.

Advocates are pushing Democrats to do more to enshrine protections into law before the November elections, but they face uncertain prospects in the evenly divided Senate.

“If we lose the House or the Senate I think it’s really unlikely we’ll be able to prevent discrimination” at the federal level, said Fran Hutchins, executive director of Equality Federation.