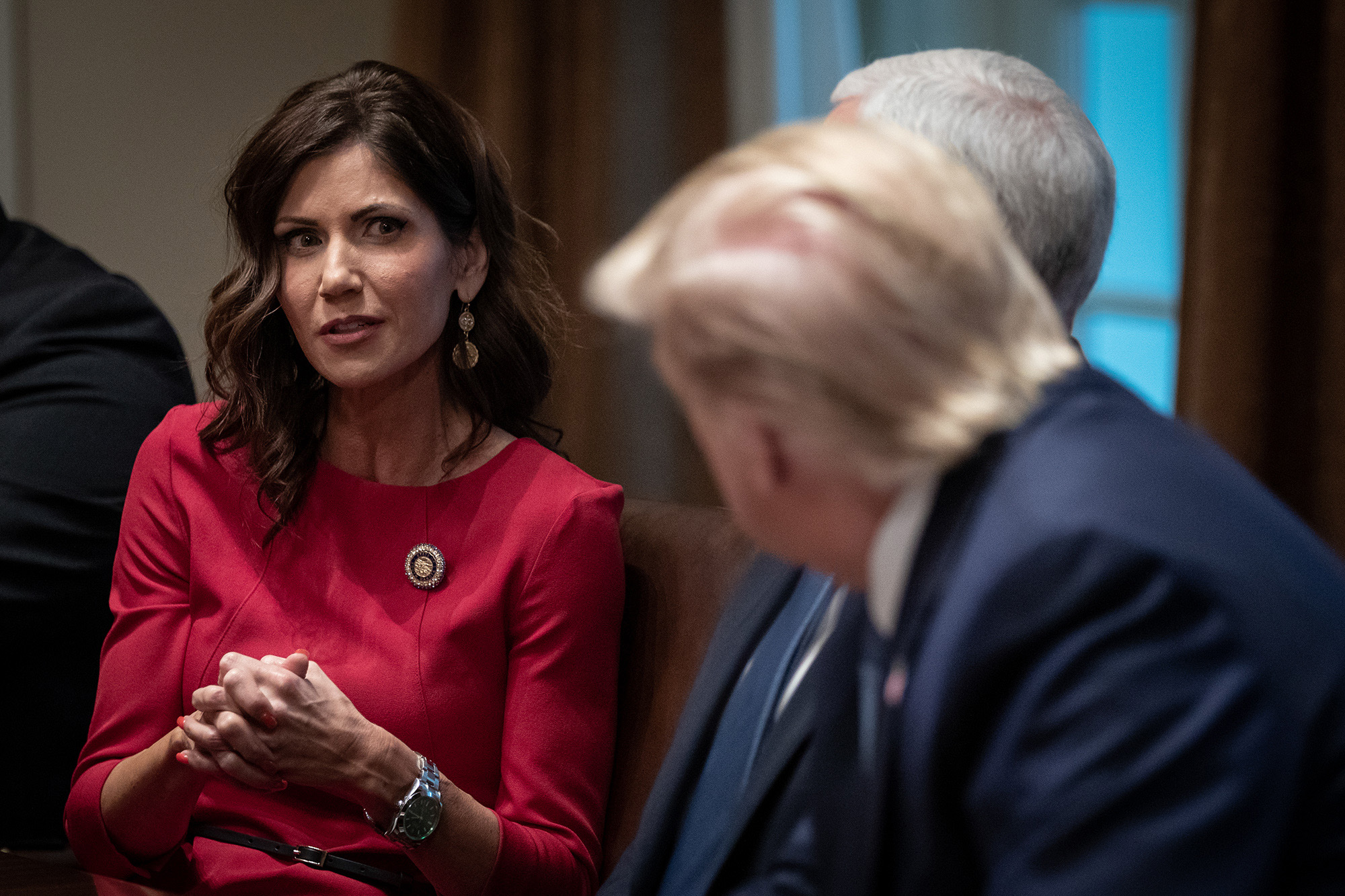 Noem speaks to then-President Trump during a meeting about the Governors Initiative on Regulatory Innovation in the White House on Dec. 16, 2019. | Drew Angerer/Getty Images
SHARE

All 11 Republicans on the House State Affairs committee voted in favor of the bill, which has been cast as “protecting fairness in women’s sports.” But advocates for transgender people decried the proposal as bullying that would deprive them of an opportunity to compete and belong to a team.

“Transgender girls like me want to play sports,” said Hoera Kingi, a high school senior who has competed on her school’s cheerleading team, adding that a ban on her competing as a girl “would have stopped me from meeting some of my favorite people and making some of my most cherished memories.”

Noem has lobbied heavily for the proposal this year, setting it on track to be the first controversial piece of legislation passed by South Dakota lawmakers in this year’s session.

It has already cleared the Senate and only awaits a vote on the House floor, where Republican lawmakers have in the past supported similar proposals. Some House members have indicated they want to see the proposal contain sharper enforcement.

“Science and common sense tell us that males are generally bigger, stronger and faster than females,” Rachel Oglesby, the governor’s policy advisor, told the committee.

Organizations representing the state’s public schools have also voiced opposition to the bill, arguing that the high school activities association already has an effective policy that evaluates applications from transgender athletes on a case-by-case basis. School groups warned the bill, if enacted, would put them at odds with federal law, exposing them to the potential of lawsuits, a federal civil rights investigation or possibly a loss of federal funding.

Noem’s chief of staff, Mark Miller, defended the legality of the proposal and pointed to instances when trans athletes in other states have given dominant performances.

“It’s sort of like terrorism, you want to keep it over there, not let it get over here,” he said when a Democratic lawmaker questioned why the governor was taking up the issue when it has not stirred controversy in South Dakota sports.

South Dakota could be the 10th Republican-controlled state to adopt such a ban on transgender women or girls. In two of those states — Idaho and West Virginia — the laws have been halted by federal judges. The U.S. Department of Justice has challenged bans in other states, slamming them as violations of federal law.

But LGBTQ advocates said statehouses have played host to a rise in discriminatory legislation in the last few years, reaching hundreds of bills every year.

Vivian Topping, the director of advocacy at Equality Federation, said that many of those proposals gain little traction, but added, “Once these bills have momentum, it is very hard to stop them.”