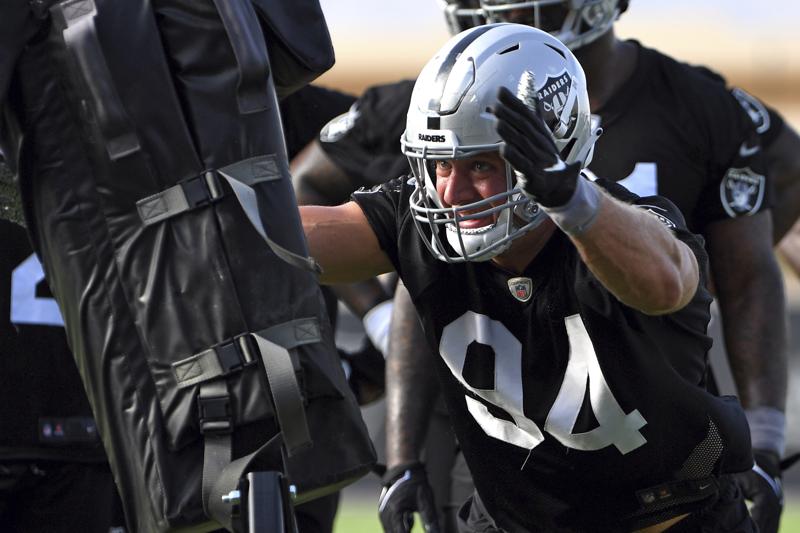 Las Vegas Raiders defensive end Carl Nassib said he has received “nothing but love and support” from his teammates after he came out as gay earlier this summer.

Nassib came out publicly on Instagram in June, saying he felt representation and visibility were important. He said that during the first couple of days “my body felt like Jell-O” but he has felt better each subsequent day.

“It’s been a great weight off my shoulders. I’ve been out to my family and friends for years at this point, so it’s been good to not have to lie when I come in to work every day and, yeah, it’s been good,” Nassib said Friday in his first comments to the media since posting the news.

Nassib, who is entering his second season with the Raiders, is the first active NFL player to come out as gay.

More than a dozen NFL players have come out as gay after their careers were over. Former University of Missouri defensive star Michael Sam was the first openly gay football player ever selected in the NFL draft, going in the seventh round to the Rams in 2014. But he never made the final roster and retired in 2015 having never played in an NFL regular-season game.

Nassib said he knew the reaction from his Raiders teammates would be good.

“I had zero stress about that. Absolutely no worries about it. Got a great locker room, great teammates. Been met with nothing but love and support, it’s been incredible,” he said. “Football players get a bad wrap but we’re humble, hard-working, accepting people and this was a great example of that definitely.”

Nassib said he made sure the Raiders coaching staff was aware before the announcement so they had time to “digest” and help with the process. He then returned home to be around family and friends when he posted his video on Instagram. Nassib was surprised by the reaction.

“I thought nobody would care. It was just such a good feeling to have all the support. I was glad I could do my part to help bring visibility and representation to my community,” said Nassib, who also donated $100,000 to the Trevor Project, a nonprofit that seeks to prevent suicides among LGBTQ youth.

Quarterback Derek Carr showed support for Nassib during his own media availability earlier in the week, saying the locker room is focused on Nassib’s role as a teammate and he’s seen no issues during training camp.

“Whether someone agrees or disagrees with what he does on or off the field, that’s everybody’s opinion and leave it like that,” Carr said. “But we’re still a family when we come in this building. We better treat him like such. From my point of view, it’s been good.

“When he came in (the locker room), I just like to watch, and not one person, from my point of view, has treated him any different. He may have a different story, I don’t know. I don’t know what his story is. But from my point of view — his locker is just a few down from mine — and I just want to make sure that he knows that, man, we just want him to play as hard as he can so we can win a Super Bowl,” Carr said. “That’s what we’re here to do.”

Nassib is a sixth-year pro who was drafted by the Cleveland Browns in 2016 in the third round out of Penn State. He played two seasons for the Browns and two for Tampa Bay before joining the Raiders in 2020. He has 20 1/2 sacks in 73 career games.